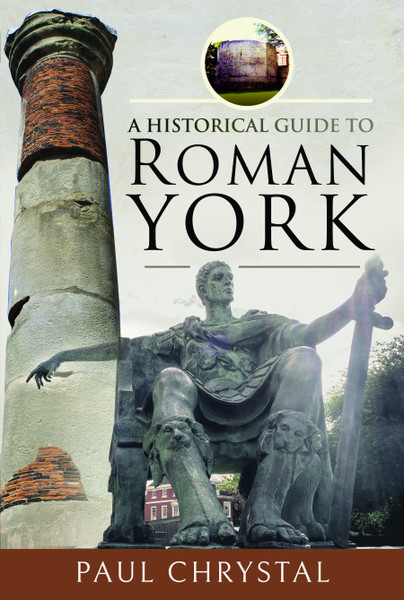 Click here for help on how to download our eBooks
Add to Basket
Add to Wishlist
You'll be £4.99 closer to your next £10.00 credit when you purchase A Historical Guide to Roman York. What's this?
Need a currency converter? Check XE.com for live rates

Considering that York was always an important Roman city there are few books available that are devoted specifically to the Roman occupation, even though it lasted for over 300 years and played a significant role in the politics and military activity of Roman Britain and the Roman Empire throughout that period. The few books that there are tend to describe the Roman era and its events in date by date order with little attention paid either to why things happened as they did or to the consequences of these actions and developments. This book is different in that it gives context to what happened here in the light of developments in Roman Britain generally and in the wider Roman Empire; the author digs below the surface and gets behind the scenes to shed light on the political, social and military history of Roman York (Eboracum), explaining, for example, why Julius Caesar invaded, what indeed was really behind the Claudian invasion, why was York developed as a military fortress, why as one of Roman Britain’s capitals? Why did the emperors Hadrian and Severus visit the fortress? You will also discover how and why Constantine accepted and projected Christianity from here, York’s role in the endless coups and revolts besetting the province, the headless gladiators and wonderful mosaics discovered here and why the Romans finally left York and Roman Britain to its own defence. These intriguing historical events are brought to life by reference to the latest local archaeological and epigraphical evidence, to current research and to evolving theories relating to the city’s Roman treasures, of which can be seen in the Yorkshire Museum in York, or in situ.

When I think of York I associate it with Vikings, not now.
The author brings Roman York to life from its early beginnings.
The Maps and pictures are so informative.
A fascinating insight in the Roman way of life and the impact it had on the British.
If you are interested in anything Roman, then this book is for you.
From Birth to Burials from Palaces to Amphitheatres the book is full of facts.
Fully Illustrated with photos and maps, Timeline and Glossary.
Some of the benefits and culture the Roman brought are still with us today, centuries after their arrival in Britain.
Well done Paul Chrystal for in insight into Roman York.

Exceptionally well written and impressively informative, "A Historical Guide to Roman York" is still another truly extraordinary history from Paul Chrystal, and one that is enhanced with the inclusion of Maps; fourteen Appendices; a fourteen page section of captioned black-and-photographs; a twenty-three page Further Reading bibliography; a ten page General Index; and a two page Index of Places in York and Nearby. Fully and enthusiastically recommended masterpiece of original scholarship that is an essential and unique contribution to community, college, and university library Roman History and British History collections.

This book was an entertaining and informative way to learn something new as I never knew that York had a Roman past.
Well researched and well written, it was an interesting read.
Highly recommended.

Very interesting and detailed description of the 300 years of Roman occupation of York from a political and social context.

This is a very interesting book which details specifically with the Roman occupation of York and the political and social atmosphere at these times over the occupation lasting over 300 years. Well and researched and thought out by the author. A thoroughly good read.

When I think about York, my mind automatically goes to the Vikings. I apologise deeply to the Romans for ignoring them. "A Historical Guide to Roman York" is written in an easy to read style, has obviously been researched thoroughly, is absolutely fascinating, and has probably cured me of my York/Viking fixation! Thanks, Paul Chrystal!

I have a degree in Classical Studies and was very excited to read this book, as I don’t know a terrific amount about Roman Britain. I wasn’t even aware that York had a Roman past! So this was great. Context for the whole of Britain was given, and lots of primary and secondary sources used. I think this is a great book for anyone with an interest, and would be a very useful academic source too.

A well written and engaging book. Excellent read for anyone visiting York. I have visited a number of times but next time I’ll take this book with me.

Well documented extensive research into the early history of invasion and development of the foreign land known as Britannia and the subjugation of it's indigenous peoples takes up the first third ending it with the new BCE/CE system. The ascent and rise of Constantine and the adoption of Christians by the Romans is also documented. It is also an excellent military history of the establishment of governmental administration. Thence it moves on to the establishment of Yorkshire. Withdrawal of Roman troops became more dramatic after the murder of Constantine and the rise in Italy of Alaric of the Visigoths... The author is well known and respected in his field and I do not hesitate to give this latest effort 5 stars.

I really enjoyed reading this. It was clearly written in an engaging style and included many of those well-chosen, intriguing details that bring history to life.

It is incredibly interesting and an excellent read which ties in archaeology, roman history, and exactly what the impact of the Romans were in early Britain and why they eventually left York. A visit to the Yorkshire Museum is a sure must after reading this.

This is a remarkable textbook covering a period of history that not only had a profound effect on the people and landscape of York but on Britain as a whole.
A Historical Guide to Roman York is well written, well crafted, well laid out. Beautifully put together with maps, drawings, and Photographs, the author has taken the reader on a vibrant tour through the Roman occupation of ancient York.
There is so much fascinating information written in this publication. The author has researched his material, so it is all up to date with all the latest findings. I always associated the 'Hand of God' with Diego Maradona, but apparently not. The one found near Hadrian's Wall in 2018 did not belong to Maradona. It was made of solid bronze and weighed 2.3 kilos. It was believed to be associated with Severus' campaign as a tribute to the god of war.
There are 14 Appendixes where you can see more information. (This is brilliant and absolutely fascinating.) There is also a list of Plaques and where you can view them. Plus, a website list where you can find more information if required.
This book should grace every historical reference library shelf.

Having an interest in Roman history in the UK , and having either lived near , or visited many places , this book was very thoroughly researched and explained in a way that keeps the reader interested.
I often enjoy a walk around York and this book will enable to see it with new eyes.
It also covers areas other than York.