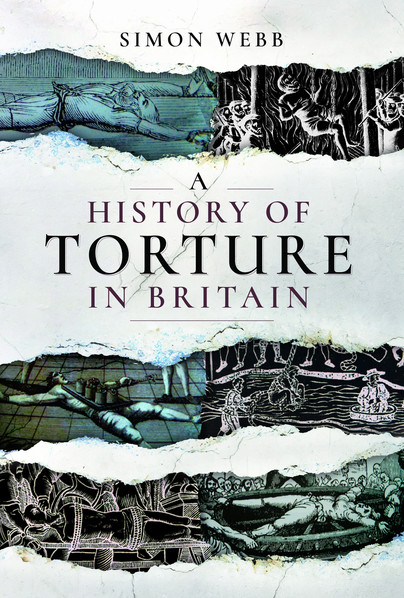 A History of Torture in Britain (ePub)

As featured in the Daily Express (December 2018): 'Scots were 'experts' in horrors of torture'

You'll be £4.99 closer to your next £10.00 credit when you purchase A History of Torture in Britain. What's this?
Need a currency converter? Check XE.com for live rates

There is an ancient and quite baseless myth that the use of torture has never been legal in Britain. This old wives' tale arose because torture had been neither endorsed nor forbidden by either statute or common law. In other words; the law has, until the late twentieth century, never had anything to say on the subject. In fact, torture, inflicted both as punishment and as an aid to interrogation, has been a constant and recurring feature of British life; from the beginning of the country's recorded history, until well into the twentieth century. Even as late as 1976, the European Court of Human Rights ruled that the British Army was guilty of the systematic torture of suspected terrorists.

In 'A History of Torture in Britain' Simon Webb traces the terrible story of the deliberate use of pain on prisoners in Britain and its overseas possessions. Beginning with the medieval trial by ordeal, which entailed carrying a red-hot iron bar in your bare hand for a certain distance, through to the stretching on the rack of political prisoners and the mutilation of those found guilty of sedition; the evidence clearly shows that Britain has relied heavily upon torture, both at home and abroad, for almost the whole of its history. This sweeping and authoritative account of a grisly and distasteful subject is likely to become the definitive history of the judicial infliction of pain in Britain and its Empire.

Fan of the morbid, gruesome, gory history a Britain? Then this is for you! And me!
A great book and an awesome addition to my library.

It's an interesting topic, albeit a gruesome one.

A History of Torture in Britain is an illuminating survey of a gruesome subject. It is a story with no winners and a reminder that despite all our complaints we live in more enlightened times, at least in Britain. Although his touch is at times a bit too light, Webb does a very good job with a difficult topic.

This one isn’t for the faint hearted and I struggled with some of the gruesome parts but it’s a really interesting read as it explains how the horrific methods of torture have evolved over time... very informative.

I particularly found the tracing of different patterns of torture use in England and Scotland interesting, especially as those countries were united, first under one crown and then under one parliament, and the way the laws of the two were applied and finally the differences accomodated over time.

Worth a read if torture’s your thing.

From the outset, it is obvious that there was a lot of research done that went into creating this book. I thought it was very informative and highly interesting. It was horrific what some people had to endure.

Well worth a read.

⭐⭐⭐⭐ Vivid Descriptions of the Uses of Torture as a Tool

A History of Torture in Britain by renowned historian and author Simon Webb is a thorough exploration of the different types of torture and their uses. Having been hired as a consultant on the subject of capital punishment for several television programmes it is safe to say he is very knowledgeable on both the death penalty, as it later became known, and methods of torture. This is a great introduction to the topic but also is informally written and accessible and requires no prior knowledge to enjoy (although this seems like the wrong word in this respect).

I found myself with goosebumps a few times and some of the descriptions were really wince-inducing as I thought of the hell those subjected to these tactics must have felt. As you may have guessed this is far from a lighthearted, easy read as it's quite graphic in places but very, very interesting. The author explores the way in which torture techniques tie in with colonisation and slavery which was the most fascinating aspect for me. Written in chronological order it gets more difficult to read as the book progresses and touches on uses of torture from our recent past. The only criticism I have is that the frequency of exclamation marks was really strange and somewhat inappropriate given the subject matter. Overall, the vivid descriptions of the horrors perpetrated by Britain both here and abroad cannot fail to provoke an emotional reaction from readers and will remain in one's mind for the foreseeable.

Anyone who has taught History knows that nothing excites young learners quite as much as descriptions of medieval torture, this book certainly provides that in spades. This book follows a largely chronological account of the history of torture in Britain, up to and including the recent past. It covers the differences between torture methods utilised in Scotland and England, and torture suffered by those in more far flung parts of the British empire such as India and Kenya. It is perhaps easier for readers to feel less outraged by the distant past than the more contemporary accounts of torture and I certainly found the book more difficult to read as I progressed through it.

The author provides detailed accounts of a variety of different torture methods, and the vivid descriptions made me wince more than once. The accounts of torture suffered by slaves in the West Indies makes for particularly grim reading. The book is written in a chatty, accessible style which might not appeal to more academic readers, but I enjoyed it for the most part. I’ve noticed a trend in recent years for non-fiction historical books to adopt a more casual style. Whether or not that is a good thing is an argument for another day, but it certainly makes for an easier read for most and would appeal more to the casual reader. My only real critique of the writing style would be the author’s almost criminal overuse of exclamation marks. This was distracting and sometimes seemed inappropriate in the context given.

The first half of the book is stronger, it begins to lose it a little towards the end where the author begins to wax lyrical about modern torture and the slightly naïve suggestion that torture is a thing of the past, if only that were true.

This is a well researched book and it is a fabulous history lesson in the ways of torture.

I did feel quite sad that these means were inflicted on people, so quite emotional at times, but that said I was amazed at the horror some torturous methods are and it was an interesting read.

As you may have guessed this is far from a lighthearted, easy read as it's quite graphic in places but very, very interesting.

I really enjoyed this book and learning about the methods of torture and their historical uses.

I feel it's such a specialised subject and this book would be suited to someone who had a lot of patience though, and not someone who wants a lighter read.