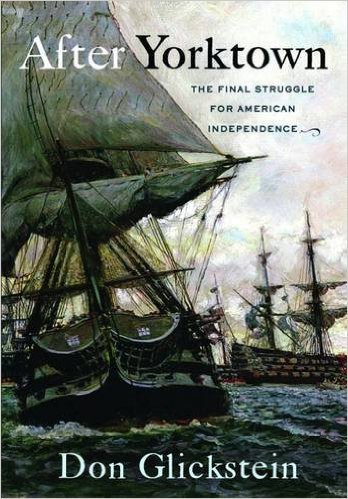 The Final Struggle for American Independence

Add to Basket
Add to Wishlist
You'll be £16.99 closer to your next £10.00 credit when you purchase After Yorktown. What's this?
+£4.50 UK Delivery or free UK delivery if order is over £35
(click here for international delivery rates)

Although most people think the American Revolution ended with the British surrender at Yorktown, Virginia, on October 19, 1781, it did not. The war continued around the world, from the Arctic to Arkansas, from India and Ceylon to Schenectady and South America. Spain, which France had lured into the war, insisted there would be no peace without seizing British-held Gibraltar. Loyalists and Native Americans continued joint operations against land-hungry settlers from New York to the Mississippi Valley. African American slaves sought freedom with the British. In April 1782, Britain seized the initiative again with a decisive naval victory in the Caribbean against the Comte de Grasse, the French hero of Yorktown.

In After Yorktown: The Final Struggle for American Independence,Don Glickstein tells the engrossing story of this uncertain and violent time, from the remarkable American and French success in Virginia to the conclusion of the fighting—in India—and then to the last British soldiers leaving New York City more than two years after Yorktown. Based on an extraordinary range of primary sources, the story encompasses a fascinating cast of characters: a French captain who destroyed a British trading post but left supplies for Indians to help them through a harsh winter, an American Loyalist who released a captured Spanish woman in hopes that his act of kindness would result in a prisoner exchange, a Native American leader caught “between two hells” of a fickle ally and a greedy enemy, and the only general to surrender to both George Washington and Napoleon Bonaparte.

After Yorktown is definitely recommended for anyone fascinated in the early period of American history. It reveals just how tenuous the American Revolution really was. Grounded in the international conflicts of the day and solidly documented, this text is a must for any student of the Early Republic. In fact, anyone who enjoys a really well written book will appreciate Glickstein’s clear prose and skillfully crafted text.

DON GLICKSTEIN, an award-winning journalist, has written for the Delaware State News, the Buffalo Courier-Express, New Bedford Standard-Times, and Seattle Post-Intelligencer, before being appointed a political press secretary. He later became manager for the nation’s largest consumer-governed healthcare system. His history writing has appeared in the Journal of the American Revolution, Columbia, Washington Magazine, and historylink.org.