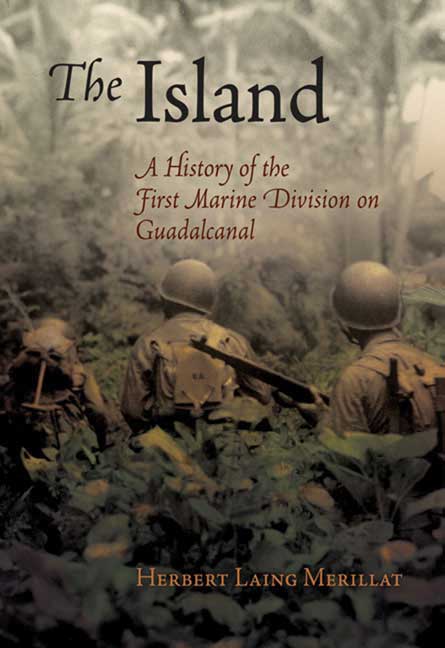 A History of the First Marine Division on Guadalcanal

Add to Basket
Add to Wishlist
You'll be £10.99 closer to your next £10.00 credit when you purchase The Island. What's this?
+£4.50 UK Delivery or free UK delivery if order is over £35
(click here for international delivery rates)

In August 1942, U.S. Marines landed on the island of Guadalcanal in the South Pacific and defeated Japanese forces for the first time, turning the tide of World War II against Japan. Written by a historian who fought alongside his fellow marines for the entire four-month campaign, The Island is an indispensable story of this hard-fought victory.

A lot is made of the significance of America entering World War Two and whatever you believe unless you were there no one truly knows what happened. The Island describes just one episode of America's involvement, the first. It details everything from the U.S. Marines landing on the island of Guadalcanal to their eventual defeat of Japanese forces for the first time. With Chapters on D-Day, the Sendai Division and departure from Guadalcanal, the book uses extensive prose backed up by important maps and photos to truthfully reveal the tale of the first American offensive that changed the tide of the whole war. Herbert Laing Merillat was educated at the University of Arizona and provides a story that will stay with you long after you finish reading the last page.

Told from the perspective of journalist Herbert Laing Merillat who fought alongside the marines for four months, The Island is a first hand report of the U.S. Marines landing on the island of Guadalcanal in the South Pacific in 1942 and their defeat of the Japanese, the first time during the war and a victory that changed the tide of war against Japan in World War II. This book is a first hand report of a brave journalist who was not only there at the battle and the turn of the tide, but also fought bravely for four months risking his life to tell this story, widely appeasing for fans of stories of courage, sacrifice and determination.

The Guadalcanal Campaign, also known as the Battle of Guadalcanal and codenamed Operation Watchtower by Allied forces, was fought between August 7, 1942 and February 9, 1943 on and around the island of Guadalcanal in the Pacific theatre of World War II. It was part of the Allied strategic plan to protect the convoy routes between the US, Australia and New Zealand. Launched a few months after the Kokoda Track campaign, it was the second major offensive by Allied forces against the Empire of Japan.