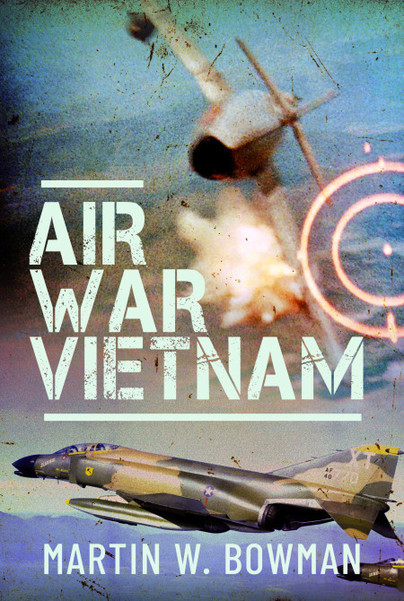 Preorder
Add to Wishlist
You'll be £17.50 closer to your next £10.00 credit when you purchase Air War Vietnam. What's this?
+£4.50 UK Delivery or free UK delivery if order is over £35
(click here for international delivery rates)

Martin Bowman’s revealing narrative of the aerial conflict in South-East Asia, 1965-1972, which had its beginnings in 1 November 1955, engulfed Viêtnam, Laos, and Cambodia and only ended with the fall of Sàigòn on 30 April 1975 has resulted from decades of painstaking fact-finding as well as detailed correspondence with surviving aircrew incorporating a wealth of first-hand accounts, some never told before, supported by dozens of rare and unusual photographs. Together they describe in adrenalin-pumping accuracy the furious aerial battles of a long suffering and bitter war in South-East Asia and in particular the frontline action in the skies over Vietnam that will keep readers on the edge of their seats.

They too will find a new and useful perspective on a conflict that cost the Americans 58,022 dead and brought the USA worldwide condemnation for its role in Southeast Asia. Nearly 2,500 Americans remained ‘missing’.

This work serves as a tribute to the courageous pilots who flew the F-104 Starfighter in the ‘Widowmakers’ war and B-52 bomber crews on ‘Arc Light’ ‘Linebacker II’ strikes and the eleven days of Christmas which ultimately ended the aerial campaign against North Viêtnam. And as well, strike aircraft such as the USAF F-4 Phantom and the F-105 ‘Thud’ and the US Navy carrier-borne jet and propeller-driven strike aircraft and the Americans’ sworn enemy, the North Vi&#7879;tnamese MiG fighters, feature large, from ‘Rolling Thunder’ onwards. Equally, the Hueys and Chinooks and other notable work horses that participated on combat assaults or Ash & Trash missions and transports like the C-130 ‘Herky-Bird’, C-123 Provider, Caribou and Viêtnamese C-47 - the ‘Haulers On Call’ - that performed sterling service during the gruelling air campaign are not forgotten either.

Here, at first hand, are their stories which also include some of the less publicised American forces like the pilots and crewmen who flew the Bird Dogs and all manner of helicopters as well as the largely forgotten Australian and New Zealand Air Force units and the Anzac Battalions whose valuable contributions are too often overlooked. So too is the cost in human misery, death and destruction.