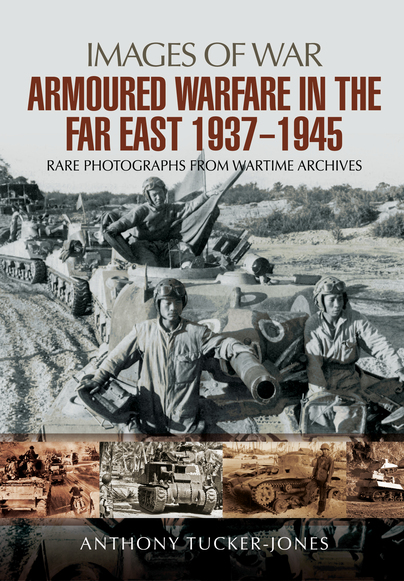 Click here for help on how to download our eBooks
Add to Basket
Add to Wishlist
You'll be £4.99 closer to your next £10.00 credit when you purchase Armoured Warfare in the Far East 1937 - 1945. What's this?
Need a currency converter? Check XE.com for live rates

Anthony Tucker-Jones's photographic history is a fascinating visual introduction to the armoured battles of the Second World War in the Far East and Asia-Pacific regions, from 1937 to 1945. In contrast to the experience of the armies that fought in Europe and North Africa, in the Far East tanks remained an infantry support weapon, and their role is often neglected in histories of the conflict.
Japanese armour confronted tanks deployed by the Chinese, Russians, British and Americans. Early in the war, against Chinese forces which lacked armour, the Japanese had some success, but their light and medium tanks were no match for their Allied counterparts. Later Japanese designs were better armed, but they were built in such small numbers that they could do little to stem the Allied advance.
The role of armoured vehicles in each theatre of the war in the Far East is shown in a selection of over 150 rare wartime photographs that record armour in action in China, Manchuria, Mongolia, Malaya, Burma and during the battles fought for the Pacific islands.

Another release in the publisher’s Images of War series which features rare photographs from wartime archives, this title concentrates on WW2 in the Far East and Asia-Pacific regions. Here tanks remained infantry support weapon as Japanese armour confronted tanks deployed by the Americans, British, Chinese and Russians. Early in the war, against Chinese forces which lacked armour, the Japanese had some success, but their light and medium tanks were no match for the Allied counterparts. The role of armoured vehicles in each Far East theatre of war is shown in a selection of over 150 wartime photographs that record armour in action in China, Manchuria, Mongolia, Malaya, Burma and the Pacific islands.

Another from a recent batch of new Images of War titles to close 2015 and this time attention turns to the Far East. Armour expert Anthony Tucker-Jones already has a number of these Images of War series books under his belt and this time he looks at the war in the Far East. Many of us I think will have our thoughts jump to Japanese and US units involved in the fighting of the island-hopping Pacific war but of course there was much more to it than that. The Japanese were at war with the Chinese before Britain, the Commonwealth and the US got involved. They were also at war with Russia, all at the same time. A period not really of tank vs tank conflicts, but a theatre of the war where tanks on all sides were much more involved with acting in one of their original design roles, that of supporting the infantry, a job in which they proved invaluable.

The book is divided into 12 chapters, basically moving chronologically through the war. So early chapters tackle the Japanese tanks, when Tigers Fight, with both Nationalist and Communist Chinese forces were fighting the Japanese for control of China, then the Russians got involved in Mongolian Mayhem and the Battle of Khalkhin Gol before the focus moves back to another stage of the fighting with China. Then comes the fall of Fortress Singapore before looking at the Island Hopping campaign and the war in both Burma and India to take us up to the end of the war as a whole.

Each chapter starts with some informative background text that in turn leads to a set of appropriate archive caption, all of which are accompanied by helpful captions to add to the story. The variety of AFVs seen in the photos is interesting for seeing the variety among the Japanese tanks, which got larger and better armed as the war progressed, as well as the tanks used by Japan's various enemies. A useful look at the sometimes neglected aspect of armoured warfare in the Far East during WW2 which should interest anyone with the historical interest in the period as well as those modellers who will find plenty of detail and ideas to help them with some suitable models and dioramas.