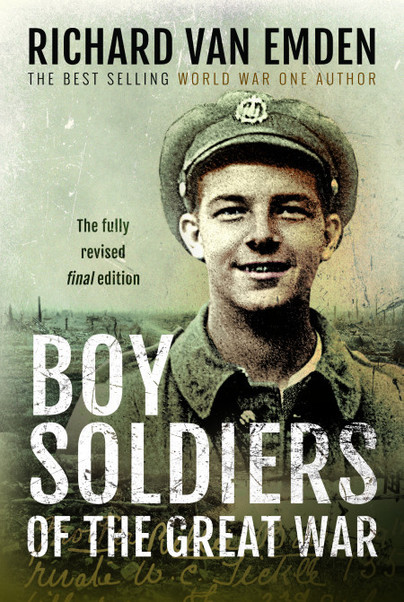 Click here for help on how to download our eBooks
Add to Basket
Add to Wishlist
You'll be £1.99 closer to your next £10.00 credit when you purchase Boy Soldiers of the Great War. What's this?
Need a currency converter? Check XE.com for live rates

Article written by the author, as featured in

'THE BOY SOLDIERS WHO WON WWI FOR BRITAIN'

Like Richard Van Emden, I too interviewed many Great War veterans when they were old men. Unlike Mr Van Emden, my notes and research are still in folders and pads whilst his have been published in various bestselling books. Both of us had the fortune to interview men who, in many cases, were teenagers or barely out of their teens when they - mostly - volunteered for King and Country.

This is a fascinating book and it charts the stories of the boys who, often with a knowing wink from a recruiting sergeant, were passed so that they could answer their country's call. Well illustrated and drawing out stories from the ordinary man in the street have become Richard Van Emden's hallmarks and it's done with sympathy, compassion and an eye to detail. Highly readable, compelling and another reminder of the futility of war.

Article: 'THE BOY SOLDIERS WHO WON WWI FOR BRITAIN: A staggering 400,000 underage lads served King and Country during the Great War, reveals one of Britain's leading historians today... and without them we would quite probable have lost.'

"Besides the statistics and numerous tales of youthful heroism, this book also contains fascinating accounts of how many lads were returned to their homes from France at the request of their parents."

This book looks like a corker just from the cover and the description. A fascinating book that looks at the lives, backgrounds and experiences of boys who had managed to get recruited for the British Army in various ways, many through lying, giving wrong information and some being allowed by officials looking the other way. As for the reasons for wanting to volunteer to go to war, some of the reasons might seem surprising, but the idealism of young people can often hide the reality of what might come. What was to come was often horrific as we know many men young and old died or suffered hellish consequences from what was an unimaginable war. The work, research and writing by the author Richard Van Emden is splendid and very well done. I of course would highly recommend this book to anyone new or old to the subject, certainly in the running for book of the year.

"If you are interested in the ground war as well as the air war you will find this book as interesting as I did."

"This is a thorough work reflecting the magnitude of the task in order to bring this book to the reading public and should be on the bookshelf of anyone with an interest in the Great War".

Boy Soldiers of the Great War, written by Richard Emden, is a very interesting book about the First World War. When I first saw the title, I was immediately intrigued by the story behind it.

This non-fiction tells the story of the many young soldiers who fought in the First World War before the age of eighteen. Their stories make you stop reading and think how horrific this war was and marvel at the fact that it was allowed to happen that boys on such a young age could fight in this war. The book is characterised by the many details and photographs of the boys involved.

Definitely recommended for anyone who wants to know more about the First World War and especially about the soldiers who fought in it.

In summary: A book that impresses, especially at the end where many names and ages are mentioned. You then make a moment of silence for them and for yourself. A book that is a must for those interested in the great war. A book where you learn a lot about the First World War and their boysoldiers.

This factual account of the involvement on the front line of underage boys is a part of WWl that has, in the general sense, been overlooked until recently. The author has been extremely diligent in his research on this subject and the details of the individuals involved demonstrated that degree of patriotism instilled in that generation that sadly is less evident today. For young teenagers to actively volunteer for active service by lying about their age coupled with the recruiters who tended to be less than honest in accepting the untruth as they were driven by the lure of a recruitment bonus, allowed these young men to face the horrors of the Western Front, Gallipoli or the Middle East. The fact that a vey few were rescued from that fate by parents who had no idea where their sons had disappeared until they were overseas or discovered by concerned Commanding Officers, shows that the majority of the 400,000 underage soldiers performed magnificently. Some of these brave lads distinguished themselves in various ways, promoted to NCO and commissioned rank before they were 18 years old, others survived until the end of the War only to have been killed in that last few weeks.
A tale of bravery, foolhardy dreams and determination in young men that reminds us in the 21st Century that those values should never be forgotten or undervalued in our society today. A fascinating read that enhanced my knowledge of this pivotal period in world history and of that generation.

This isn’t a book for the faint-hearted, some of the letters written by these young men back to their families are heartbreaking, but I do feel that these stories need to be told. The statistics are changing constantly as information is released by the National Archive, and hoards of letters are found in cupboards. This should all be publicised more widely, to educate current generations about twentieth century history, living conditions and attitudes to working people. Sadly everyone who fought in that War has passed away now, but that generation, and in particular the 400,000 plus who served overseas before they were 19 years old, deserve our eternal gratitude.

I leave you with a rating of five mushroom heads and the words of 17-year-old Reginald Kiernan, who after six months in France wrote:

‘It’s the lying like those fellows we’ve passed –on your side with a fixed grin on your face, or on your back with your eyes turned up – and no one caring! And it’s the thought that you don’t die a hero. That would help. There are no heroes here. No one cares’.