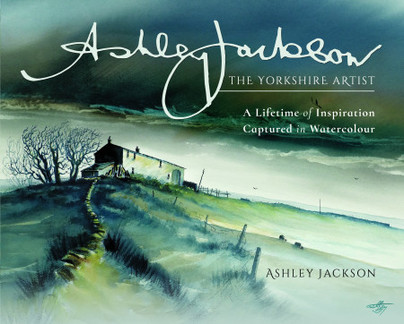 A Lifetime of Inspiration Captured in Watercolour

Add to Basket
Add to Wishlist
You'll be £25.00 closer to your next £10.00 credit when you purchase Ashley Jackson: The Yorkshire Artist. What's this?
+£4.50 UK Delivery or free UK delivery if order is over £35
(click here for international delivery rates)

'Ashley Jackson – The Yorkshire Artist' contains a collection of paintings that have been personally chosen by the artist to bring together his personal memories and intimate reflections of the emotions and atmosphere that he has captured in each watercolour painting. As he explains, 'All artists paint what inspires them, what allows them to capture what they see with their eyes with their hands and heart. We all have differing inspirations, mediums and connections with our subject – mine is the Yorkshire Moors.' From the open moorland of Marsden Moor to the inhabited landscape of Whitby, this book brims with what Ashley does best; capturing the atmospheric skies and drama of the landscape. As Ashley explains, 'I have strived throughout my life to witness and portray every mood swing of nature as she takes a stand against all that the elements throw at her, whether that be rain, wind, snow or fire.' You will truly find Ashley Jackson and his 'Yorkshire Mistress', as he calls the Yorkshire landscape, laid bare in these stunning paintings.

There can’t be many better ways to get to know the Yorkshire Dales than to take a day out in the summer sunshine, especially with a camera poised to capture those picture postcards awaiting at every turn.
But to really get to know the Dales, in their real life, day by day, ever-changing forms, you need a lingering glance – more than one! -- through Ashley Jackson’s new book, his personal selection from the many pictures he’s painted of the Dales over his lifetime as a watercolour artist.
There are about 60 here, beautifully illustrated, every one reflecting the Dales in a different mood. From “Passing Storms” to “Coming Home Before The Rain”, Ashley reveals the endless variations the light can cast on his favourite scenes from raging blizzards to sedate sunsets.
As a 16-year-old art student, he vowed he would never become “a genius of the chocolate box” – and these paintings confirm how well he stuck to his vow. Here he’s captured the Dales as few people, apart from those who live there, ever see them. And what drama he has captured. A book to savour and linger over …

A pleasure for the senses.

It's not a 'how to' book, but serves as inspiration with accompanying quotations from the artist.

There's something unsettling and ephemeral yet at the same time uplifting and beatific about his paintings which often depict either gathering storm clouds, or layers of light after the heavens have opened.

Some of his recent work, which is amongst his best, is almost abstract which elevates it to another level and at the same time is a nod to one of his biggest heroes and influences - JMW Turner.

A beautiful book, about a beautiful part of England, by an artist who is totally besotted with his subject. As a visual declaration of his adoration, it can have few peers.

This beautifully presented book brings together dozens of paintings chosen by this famous artist. The result is a deeply personal artistic journey across the moorlands of Ashley's beloved Yorkshire, from Marsden Moor to Whitby.

Ashley Jackson, Yorkshire’s favourite artist, has been capturing his artistic passion for God's County in his paintings and sketchbooks for over fifty years. Since opening his first gallery back in 1963, he has become one of the country's leading and most successful landscape watercolourists. His unique evocative and distinctive paintings of brooding moorlands have become synonymous with Yorkshire, and more particular the moors above and around his Gallery situated in the heart of the Pennines, Holmfirth.

Further information can be found at www.ashley-jackson.co.uk