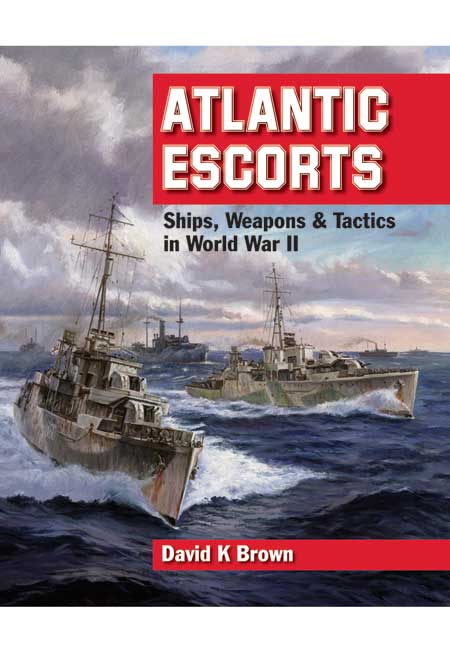 Click here for help on how to download our eBooks
Add to Basket
Add to Wishlist
You'll be £9.99 closer to your next £10.00 credit when you purchase Atlantic Escorts. What's this?
Need a currency converter? Check XE.com for live rates

Winston Churchill famously claimed that the submarine war in the Atlantic was the only campaign of the Second World War that really frightened him. If the lifeline to north America had been cut, Britain would never have survived; there could have been no build-up of US and Commonwealth forces, no D-Day landings, and no victory in western Europe. Furthermore, the battle raged from the first day of the war until the final German surrender, making it the longest and arguably hardest-fought campaign of the whole war. The ships, technology and tactics employed by the Allies form the subject of this book. Beginning with the lessons apparently learned from the First World War, the author outlines inter-war developments in technology and training, and describes the later preparations for the second global conflict. When the war came the balance of advantage was to see-saw between U-boats and escorts, with new weapons and sensors introduced at a rapid rate. For the defending navies, the prime requirement was numbers, and the most pressing problem was to improve capability without sacrificing simplicity and speed of construction. The author analyses the resulting designs of sloops, frigates, corvettes and destroyer escorts and attempts to determine their relative effectiveness.

Atlantic Escorts has flowed from the pen of a master who has written so many fine books about the history of ship construction. It is a small masterpiece.

a valuable addition to the bibliography of the Battle of the Atlantic.

Written in such a way that both the informed and layman will derive something new as regards the design, not only of the ships but also of the equipment that was developed during the war years. This is of course augmented by copious illustrations both photographic and by line drawings. The photographs are in most cases completely new and are all well presented and reproduced. This in itself should give the model-maker plenty to ponder if they are interested in warships of this period. All in all, this is certainly a book that should be on the shelves of persons interested in the development of the smaller warships and their tactical use prior to, and during WWII.

The author, former Deputy Chief Naval Architect with the Royal Corps of Naval Constructors, has used his experience to bring to life the different classes of escort so that one can almost feel the motion of the vessel beneath ones feet. This book, says the author, is intended as a tribute to the designers and builders of the escort vessels, as well as their operators. It has succeeded.

Altogether, a very detailed year-by-year account of escort development for anti-submarine work from the period between the wars to post World War II. Readers will learn much from this record of the production of an effective type of escort vessel for defending merchant ship convoys in the Battle of the Atlantic. We should expect nothing less from an author who spent his entire life working with the Royal Corps of Naval Constructors, retiring as Deputy Chief Naval Architect in 1988.