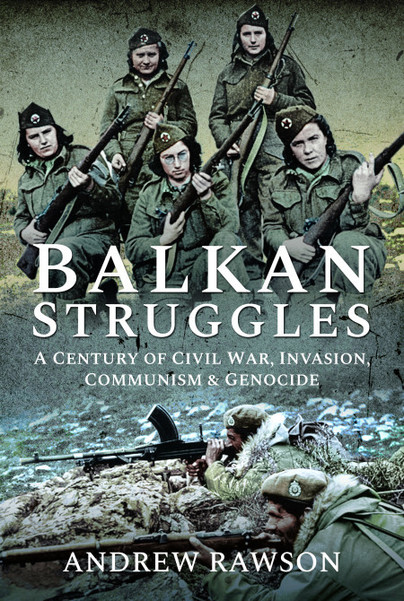 A Century of Civil War, Invasion, Communism and Genocide

Add to Basket
Add to Wishlist
You'll be £19.99 closer to your next £10.00 credit when you purchase Balkan Struggles. What's this?
+£4.50 UK Delivery or free UK delivery if order is over £35
(click here for international delivery rates)

The Balkans witnessed several bloody conflicts during the twentieth century. New nations emerged in 1913, after 500 years of Ottoman rule, only for them to go to war just weeks later. The assassination of Archduke Franz Ferdinand in Sarajevo in June 1914 sparked the series of events that led to the Great War. Most of the belligerents would be drawn into the region, while the post-war border changes created tensions.

Italian designs on the Balkans resulted in the occupation of Albania in March 1939, but it failed to take control of Greece over the winter of 1940-41. A German blitzkrieg quickly defeated both Yugoslavia and Greece in the spring of 1941, and the population of both countries then suffered terribly as the occupying forces encouraged collaboration and punished resistance.

The area was rife with guerrilla activity, as monarchists, nationalists and communists fought each other as often as the occupying troops. This, in turn, led to communism sweeping across most of the region in the post-war years, while Greece was taken over by a fascist regime.

Communism eventually ended, but ethnic troubles resulted in a ten-year conflict across Yugoslavia. It would be divided into Croatia, Bosnia and Kosovo, at the end of the bloodiest conflict in Europe since World War II.

The Balkans area has always been one of those areas, Geographically in history that has remained a mystery mainly due to the fact so much has gone on and little has been reported. Many will understand the area was prominent in the First World War and suffered under Hitler during the Second World War, but I think that the more recent conflict in the 90’s would have been seen by many as a ‘new’ conflict. Whereas the two major conflicts were reasonably simple to understand, the later conflict involved many different sides and influences that would have made it more complicated to understand. But reading this book makes things a lot clearer and understandable over the whole period of conflict, not just the recent one. The author has done a great job in setting things out more clearly and focused. A really good read, one of those books that can give you a good understanding of the subject.

It’s a fascinating read about a region that has been plagued with terrible conflicts and genocide. I would recommend anyone with an interest in modern warfare take a read of this book... I’m not sure the more recent conflicts will make a period to wargame. Though you could use some of the background for a hypothetical WW3 scenario.

I found the chapters that covered the two world wars of more interest than the more recent conflicts which were very brutal with many of those fighting committing war crimes. I suspect there is more for a historian in this book than a wargamer, but there is some useful information for anyone looking to run a campaign in the region in either the First or Second World War.