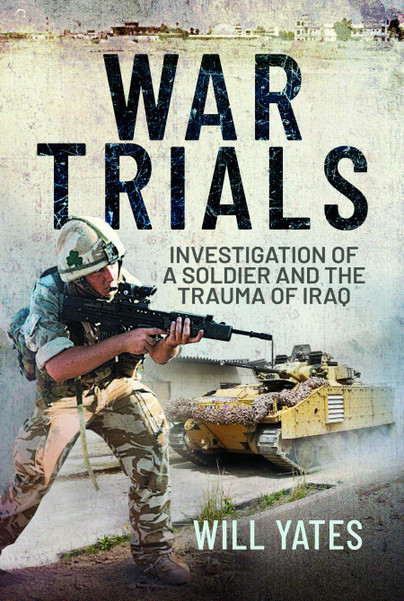 Investigation of a Soldier and the Trauma of Iraq

Add to Basket
Add to Wishlist
You'll be £25.00 closer to your next £10.00 credit when you purchase War Trials. What's this?
+£4.50 UK Delivery or free UK delivery if order is over £35
(click here for international delivery rates)

War Trials tells the gripping and in-depth true story of a British soldier’s role in the drowning of an Iraqi teenager in May 2003, the devastating investigation and resulting court martial. This narrative non-fiction tracks the soldier’s life from tight-knit broken family home in Merseyside through deadly urban conflict in the Middle East, to a different battle fought against PTSD while he awaited a military tribunal back in the UK. The military court case in 2006 marked the first of its kind relating to the Iraq war and a case that opened the flood gates of multiple investigations and inquiries into the conduct of soldiers overseas.

Based upon rigorous new research, this book’s untold personal story explores the horrors of battle and the chaos of a post-war city and a young soldier’s struggle against depression, suicide attempts and deep sense of being let down by the army he sought to serve.

This soldier would eventually endure numerous investigations and face the threat of the International Criminal Court for war crimes but these are the shocking events that started it all. It is the compelling story of a contentious military campaign with little preparation for the disastrous fall out; the soldiers pushed to the limit who maintained a wall of a silence after doing the unthinkable; and a floating body of dead child who came to symbolise a generation lost to war.

Author interviewed on The Voices of War Podcast

The Voices of War Podcast

This is easily the best book I have read this year and perhaps the best written about the senseless war in Iraq.

I definitely recommend this book to those interested in the War on Iraq, and in particular, on its effect on the troops, and to those who want to learn in more detail what a war trial might entail (for those accused). It is a harrowing read at times, but as I’ve said on many occasions, there are things we should never forget and lessons to be learned.

Will Yates is a freelance writer, documentary producer and investigative researcher for television, film and radio. He has spent more than 18 years producing factual programming for Channel 4, BBC, The National Geographic, The Travel Channel and The History Channel. His credits include researching the 2005 BAFTA-winning Channel 4 docu-drama, The Government Inspector, about the Iraq War and the suicide of British weapons inspector Dr David Kelly.