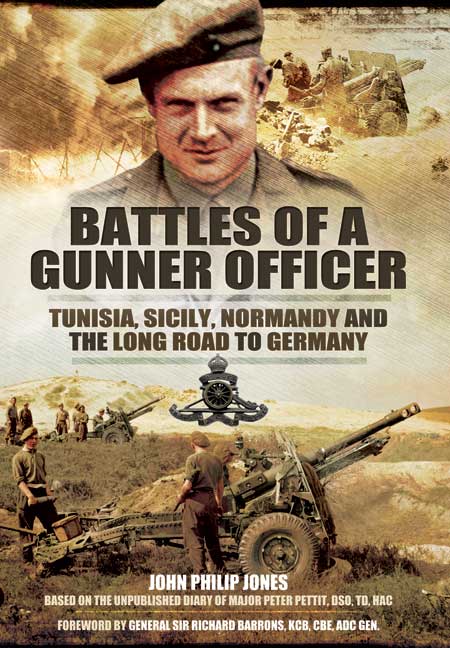 Battles of a Gunner Officer (ePub)

Tunisia, Sicily, Normandy, and the Long Road to Germany

Click here for help on how to download our eBooks
Add to Basket
Add to Wishlist
You'll be £4.99 closer to your next £10.00 credit when you purchase Battles of a Gunner Officer. What's this?
Need a currency converter? Check XE.com for live rates

What was it like to serve as an artillery officer during the Second World War? How did he view the battlefield and experience combat? And how did his work with the guns combine with that of the other arms - the infantry, the tanks? Peter Pettit's diary, covering his entire wartime career in the Royal Artillery, edited and with an extensive introduction by John Philip Jones, offers a rare insight into the day-to-day existence of a gunner at war, and it is a valuable record of the role played by the Royal Artillery during the conflict.

Since Peter Pettit served as a field officer in North Africa, Sicily, Normandy and during the Allied advance across France and Belgium into Germany, his account shows the wide range of challenges that confronted the artillery in different conditions at each stage of the war. Although the landscapes and battlefields changed, the practical problems and acute dangers he faced remained much the same, and he recorded them in the same open and forthright way.

His authentic record, combined with John Philip Jones's meticulous description of the planning and progress of each campaign, provide a rounded view the nature of the artillery war and the men who fought it.

'Professor John Philip Jones breaks new ground as he brings into the light for the first time the private record of one rather special participant. Peter Pettit's personal and contemporaneous notes detail his journey from the first encounters with a determined enemy in Tunisia, through the difficult invasion of Sicily, and finally on to the outstanding events of Normandy in 1944 . . .

. . . This story is made much more interesting and accessible for the general reader by the accompanying succinct historical overview of the events. . .

. . . For anyone looking for a rare insight into the hard business of field soldiering in the crucible of war, these diaries paint a very colourful, accurate and illuminating picture.'


his is an excellent book, combining an interesting diary with a useful supporting text, to give some idea of how the Royal Artillery earned its excellent reputation.

This is one of the better kinds of edited diary, put in context and with an author whose writings genuinely illuminate.
Worth the read, if the latter half of the war is your area of interest.

Society of Friends of the National Army Musuem

This is an excellent account from a fresh perspective that will be memorable for the reader. It is impressive that new views and insights are still emerging from a war that is now almost seventy years from its ending.

Peter Pettit (1908-2003) was a London solicitor, senior partner in a prominent family firm. He was educated at University College School; then spent five years serving articles to prepare him for the Law Society examination to qualify as a solicitor. His father had been a member of B Battery, HAC, and he himself joined the battery in 1927. He was commissioned in 1932 and before the outbreak of war was commanding B Battery. After three years training in Britain, he served overseas with four different field artillery units, and in 1945 became CO of 55th Field Regiment (West Somerset Yeomanry). After the war he was for many years a member of the Court of Assistants of the HAC; and gave long unpaid service to local government, in turn as a Councillor, Alderman and Mayor of the ancient London borough of St Marylebone.