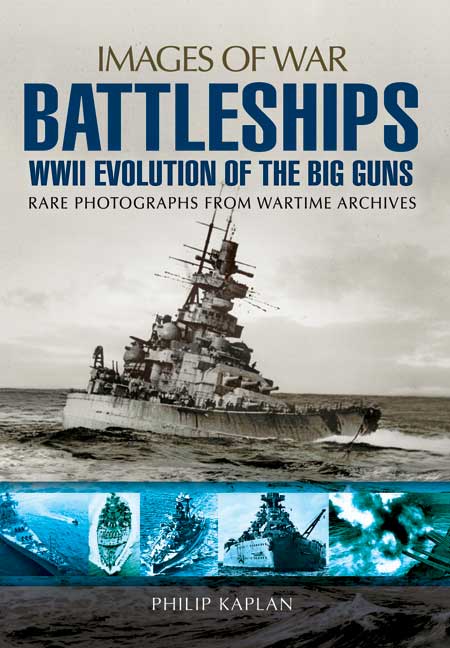 Click here for help on how to download our eBooks
Add to Basket
Add to Wishlist
You'll be £4.99 closer to your next £10.00 credit when you purchase Battleships: WWII Evolution of the Big Guns. What's this?
Need a currency converter? Check XE.com for live rates

Beginning with a pictorial essay on battleship construction in the 1930s and 1940s, this new book looks at the various design facets of the last great capital ships of the world's navies. Kaplan offers us a glimpse into those massive American and German navy yards and construction facilities that were put to use during this time, acquainting us with the arenas in which these final examples of battleship technology were laid down, built up, launched, fitted out, commissioned and taken out to sea.

The book roots itself in a period of monumental change within the history of contemporary warfare. With the baton being passed from the battleship community to that of the aircraft carrier, the iconic battleship was gradually superseded by a new and even more threatening weapons system. It was destined to be consigned to the history books, whilst newer, slicker and more efficient fighting machines took precedence. This publication serves as a tribute to a lost legend of naval warfare.

There is a look at some of modern history's most significant battleships, relaying their thrilling stories, defining characteristics and eventual fates. Ships featured include Scharnhorst, Gneisenau, Warspite, Tirpitz and Yamato.

The book is completed with 'Fast and Last', a visit on board the four final examples of battleship technology and design, the last serving battleships USS Iowa, USS New Jersey, USS Wisconsin, and USS Missouri. Their Second World War careers are recounted, as are the qualities that made them special.

This book is one of the best I have read on battleships etc. during the 19th century. It goes into great detail about the location and damage that the ships incurred.

Beginning with a pictorial essay on battleship construction in the 1930s and 1040s, this new book looks at the various design facets of the last great capital ships of the world's navies.

I recommend this book to anyone interested in the history of some of the mighty battleships.