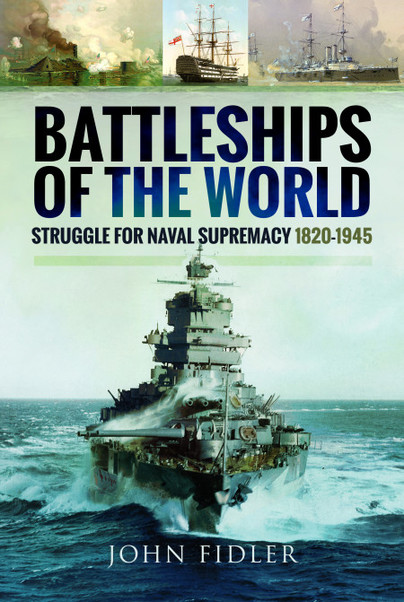 Battleships of the World (ePub)

Click here for help on how to download our eBooks
Add to Basket
Add to Wishlist
You'll be £4.99 closer to your next £10.00 credit when you purchase Battleships of the World. What's this?
Need a currency converter? Check XE.com for live rates

The battleships of the world’s navies in the 1820s were descended directly in line from the Revenge of 1577: they were wooden-built, sail-powered and mounted guns on the broadside, firing solid shot.

In the next half century, steel, steam and shells had wrought a transformation and by 1906, Dreadnought had ushered in a revolution in naval architecture. The naval race between Britain and Germany that followed, led to the clash of the navies at Jutland in 1916. Though this was indecisive, the German navy never again challenged the Grand Fleet of Britain during the war, and eventually the crews refused to put to sea again.

Disarmament on a massive scale followed, but the battleship was still regarded as the arbiter of sea-power in the years between the wars. However, the advocates of air power were looking to the future, and when in 1940 biplane Swordfish torpedo bombers of the Fleet Air Arm sank three Italian battleships at their moorings in Taranto, the Japanese sensed their opportunity. Their attack on the American Pacific fleet base at Pearl Harbor sank eight battleships – but the American carriers were at sea, and escaped destruction.

Given the distances involved, the Pacific war was necessarily a carrier war, and in the major actions of the Coral Sea, Midway, Leyte Gulf and the Philippine Sea, all the fighting was done by aircraft, with battleships reduced to a supporting role.

Soon after the war ended, most were sent for scrap, and a naval tradition had come to an end.


As a broad-based survey, Battleships of the World is most suitable for general readers who seek an introduction to the topic.

The book is well-illustrated with more than 100 black and white photos in the text and a colour insert with period depictions of famous and notable ships. It offers a solid overview of one of history's most significant weapons.

The book is recommended as an introductory text for someone new to naval history or for the casual reader.

This volume is likely to appeal to a variety of readers. These could include those with a specific interest in ‘Battlewagons’ and very large heavily-armed warships, naval history; the various navies which used such vessels, and general military history. Warship modellers may also find the photographs a useful resource.

The author clearly knows his subject and it is logical to use the evolution of the battleship from 1820 as a vehicle to trace the ups and downs of strategic naval arguements.

Serious enthusiasts and professionals tend to buy every well-written book in the genre of their interest, but for other readers it can be
a challenge as book shelves fill up. This new book should appeal to ever reader who has any interest in the development of naval technology and the evolution of the line of battle ship, Essential Reading.

140 pages is not a lot for an account of the development of the battleship, particularly as about half the content is illustrations – but these are not to be grudged, as they are excellently selected and informative. Indeed they are the redeeming feature of this short work, bringing to us many images which would otherwise continue to lurk unseen in the copious archives of the NMM.