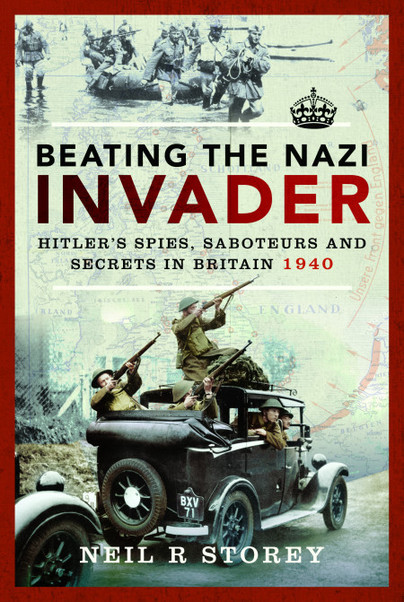 As featured in the Daily Mail: 'How an army of curtain twitchers outsmarted Adolf's German spies in wartime Britain...'

You'll be £9.98 closer to your next £10.00 credit when you purchase Beating the Nazi Invader. What's this?
Need a currency converter? Check XE.com for live rates

Beating the Nazi Invader is a revealing and disturbing exploration of the darker history of Nazis, spies and ‘Fifth Columnist’ saboteurs in Britain and the extensive top secret counter-measures taken before and during the real threat of invasion in 1940.

The author’s research describes the Nazi Party organisation in Britain and reveals the existence of the Gestapo headquarters in central London. The reader gains vivid insights into Nazi agents and terrorist cells, the Special Branch and MI5 teams who hunted them and investigated murders believed to have been committed by Third Reich agents on British soil.

Accessing a host of recently de-classified files the book explores the highly classified measures taken for the protection of the Royal Family, national treasures and gold reserves. The British government made extensive plans for the continuation of government in the event of invasion including the creation of all-powerful Regional Commissioners, ‘Black Lists’ of suspected collaborators and a British resistance organisation. We also learn of the Nazis’ own occupation measures for suborning the population and the infamous Sonderfahndungsliste G.B, the Nazi ‘Special Wanted List’.

The result is a fascinating insight into the measures and actions taken to ensure that Great Britain did not succumb to the gravest threat of enemy invasion and occupation for centuries.

Beating the Nazi Invader is a truly engrossing work which is a must for those with an interest in matters relating to German preparations for the proposed invasion and the measures put in place to counter it. Well-illustrated, with useful appendices, references and bibliography, this book is very highly recommended.

With a cast of colorful characters, some familiar and others not, and a variety of stories that will be new to casual readers, this is a strong recommendation for most libraries with history-loving patrons. For readers of Agent Zigzag by Ben Macintyre and A Woman of No Importance by Sonia Purnell

The Nazi sympathisers next door are revealed on war-time blacklist

Was your granny a Nazi next door? Home Office reveals blacklist featuring 720 ordinary Britons who 'wanted to help Hitler if he invaded the UK'

As featured on BBC Gossip

How an army of curtain twitchers outsmarted Adolf's spies: Wartime Britain was awash with German agents. But as a new book tells, they were no match for a paranoid nation on the lookout for 'nuns' with hairy legs and bees carrying secret messages.