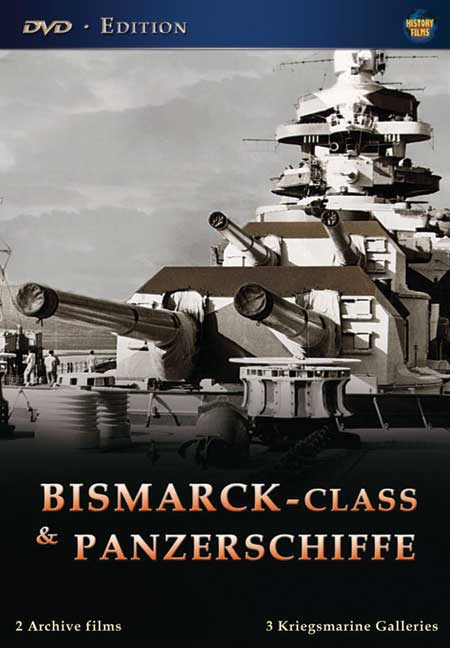 Add to Basket
Add to Wishlist
You'll be £11.89 closer to your next £10.00 credit when you purchase Bismarck-Class & Panzerschiffe DVD. What's this?
+£4.50 UK Delivery or free UK delivery if order is over £35
(click here for international delivery rates)

During the duration of the Second World War, the German Kriegsmarine (Navy) introduced four new types of battleship that posed a massive threat to the Allied equivalents patrolling the shipping lanes in the Pacific and Atlantic oceans. The design and construction of the famous Bismarck and Tirpitz battleships saw two of the most advanced and revered ships in the history of naval warfare. These giants of the naval world displaced over 50,000 tons and had an arsenal containing over 70 large cannons, including eight 38 cm guns. The launching of these two iconic ships in Hamburg and Wilhelmshaven went down in the history books as a highlight of naval history. This DVD shows these maritime heavyweights in action, from their launch and basic training to operations in the open ocean.

Also featured on this DVD is the Panzerschiffe (Armour Plated Ships) of the Deutschland Class. These powerful battle units sported 28 cm cannons, with these cruisers packing much more of a punch then their enemy Allied counterparts. Complete with original rare and unseen archive footage showing ships of the Kriegsmarine in all their splendor, this DVD also has two bonus films and three original picture galleries, making this the ideal purchase for history and maritime enthusiasts.

The images are fascinating giving a clear impression of how important these massive warships were to become.
All in all this DVD would make a good companion to any collection of reference material on either Bismarck, Tirpitz or a study of the Kriegsmarine in general and would surely be of inspiration to anyone modelling one of the featured warships