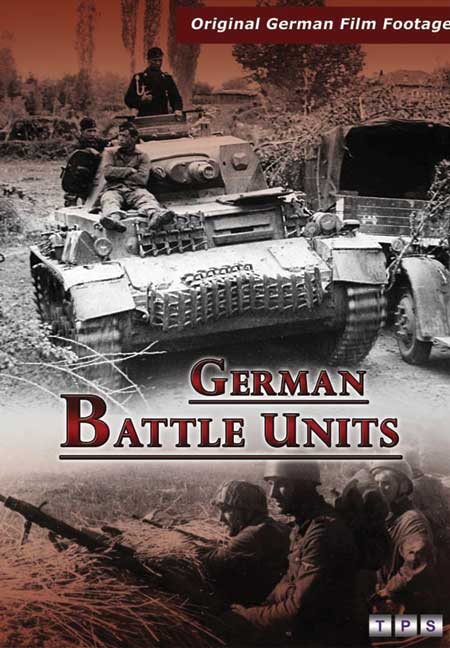 Add to Basket
Add to Wishlist
You'll be £14.99 closer to your next £10.00 credit when you purchase German Battle Units DVD. What's this?
+£4.50 UK Delivery or free UK delivery if order is over £35
(click here for international delivery rates)

Using original German film footage, 'German Battle Units' follows the Wehrmacht as they push eastwards towards Moscow. The troops had to cope with an enormous and difficult workload - trenches had to be dug, mines had to be set or diffused, new bridges had to be built, and huge quantities of supplies had to be transported to the front. The fast advance, on dirt roads and through boggy terrain, tested the the soldiers' marching skills and perseverance.

This collection of eye witness footage is fascinating viewing for those interested in the German Army on the Russian Front.

Using original wartime footage it shows the hardships endured by the ordinary fighting man as the Blitzkrieg tactics were used in Poland, Western Europe and Russia. The bonus material includes artillery and anti-tank defence and whether viewed on your computer or DVD player this is a fascinating documentary.

This new DVD from Pen and Sword looks at the various German Battle Units of the Second World War. The 55 minute duration black and white documentary film has an English commentary and features a variety of German vehicles and equipment filmed in various theatres of operation throughout the war, with various bonus features and photo galleries included.

“..this DVD and those others in the series will continue to provide absorbing viewing long into the future. The main target market for this DVD series is undoubtedly the military enthusiast, but the DVDs are affordable for a much wider range of viewers and should sell well