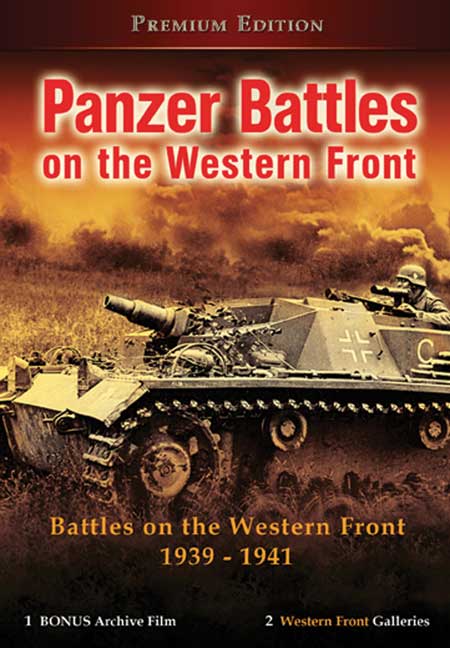 Add to Basket
Add to Wishlist
You'll be £7.50 closer to your next £10.00 credit when you purchase Panzer Battles on the Western Front. What's this?
+£4.50 UK Delivery or free UK delivery if order is over £35
(click here for international delivery rates)

After the British and French declarations of war on the German Reich in September 1939, the military and political officials in charge expected an immediate torrent of death and destruction. What actually transpired has since become known as the Phoney War, whereby millions of prematurely evacuated citizens began to move back to their respective homes. It wasn't until May 1940, after the continuing British campaign in Norway and the mobilisation of a strong British Expeditionary Army in France, that the German military made necessary major plans for a German offensive in the West. Three army groups and ten tank divisions rolled out in a lighteneing fast campaign against Belgium, Luxembourg, Holland and France, and later isolated the British Expeditionary Force at Dunkirk. This DVD explains the German Tank's role on the Western Front using original archive material

Interesting DVD with both English and German language options.
If you want film of the early Panzers (or of the U-boats) this is a definite 'must by'.

The documentary style DVD runs for approx 58 minutes and features black and white wartime footage that deals with what is widely known as the ‘Phoney War; between 1939 and 1941. The film includes two bonus archive films and four original photo galleries and retails at £16.99.

This DVD tells the story of the battles fought on the Western Front by the most successful German tank of World War 2. Using some unseen and it has to be said remarkable German archive footage the History Film team have come up with another excellent video.
Because it is viewed mainly from the German perspective I found it all the more interesting. It is honest and yet loyal to its roots. Very straight forward in its narrative and made for a very enjoyable hours entertainment.
History Film DVD’s always of the same quality. They are real value for money. Another superb DVD from Pen & Sword Digital and one that all of those with an interest in German tank warfare are bound to enjoy.

The quality is generally good and features footage not seen since WWII.

More accurately described by its subtitle, Battles on the Western Front 1939-1941, this excellent documentary details the German perspective on the Phoney War, the Battle of France and the stalemate which followed on either side of the English Channel. The narrative itself is not remarkable, but as with all History Films productions, its true value lies in the superb range of rare archive footage on display, which in this instance draws on a considerable array of film from both sides of the West Wall and the Maginot Line, painting a riveting picture of events as they unfolded.