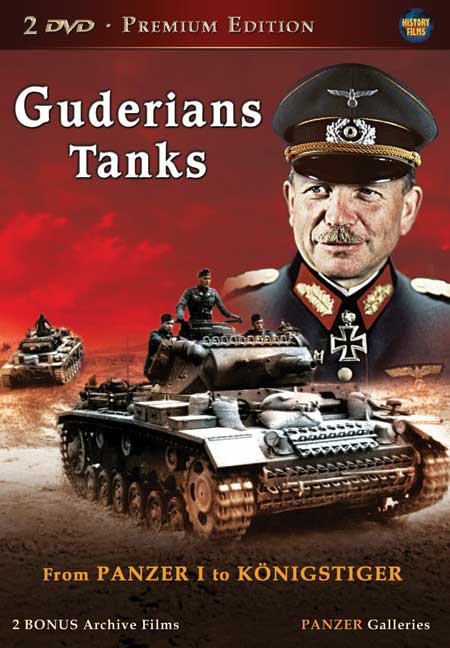 Add to Basket
Add to Wishlist
You'll be £21.99 closer to your next £10.00 credit when you purchase Guderian's Tanks. What's this?
+£4.50 UK Delivery or free UK delivery if order is over £35
(click here for international delivery rates)

HEINZ GUDERIAN was the visionary, creator and designer behind many of Germany’s most iconic Tanks. This brilliant strategist developed the attack tactics of the German Tanks Divisions. The key successes in the campaigns against Poland, France, the Balkans and, from 1941/42 in the Soviet Union and North Africa, can be credited to the Panzer troops set up by GUDERIAN.

From Panzer I, the KING TIGER ( TIGER II ) and the PANTHER to the various assault guns, Tank Hunter vehicles and self propelled guns, these are just a small selection of the many fascinating Wehrmacht vehicles that feature in this film.

The military career of General Colonel Heinz Guderian began in the Great War and ended on 29 March 1945, for health reasons. The legendary Tank General was highly respected by all sides for his expertise in the development and construction of tanks and this fascinating DVD shows his tank legacy, using original German archive footage.

a quite stunning sequence of beautifully choreographed pre-war propaganda films showing armour, aircraft and much more on exercise. This sort of stuff must have thrilled the cinema audience marvelling at just how powerful the Reich had become. Stirring stuff; indeed.

A splendid two-disc DVD set focusing on the career of Heinz Guderian, whose inspired vision masterminded the creation and expansion of Germany's tank arm, and established the strategic principles that they would follow to great effect in battle. Yet this is more so the story of the panzers themselves, from the days of pre-war testing to those models which saw extensive service on the Eastern Front, culminating in the much feared Panther and King Tiger tanks. Accompanying the main feature are three bonus documentaries and numerous photo galleries.