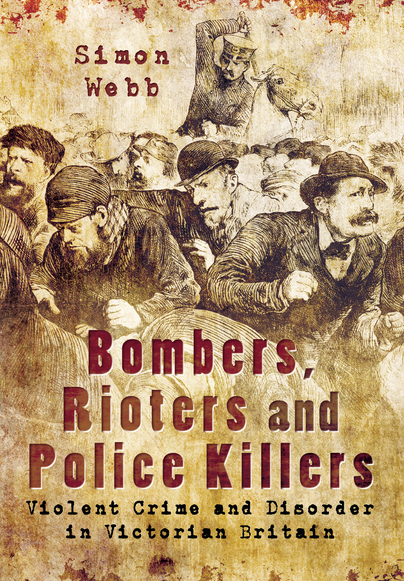 Click here for help on how to download our eBooks
Add to Basket
Add to Wishlist
You'll be £4.99 closer to your next £10.00 credit when you purchase Bombers, Rioters and Police Killers. What's this?
Need a currency converter? Check XE.com for live rates

Civil disorder, violent crime and terrorism were all considerably worse during the Victorian period than they are today, though ironically many regard this era of British history as a being a by-word for stability and order. Simon Webb reveals the disorder and violent crime endemic in Victorian Britain; a time when the citizens faced problems eerily similar to those with which we have to contend today.
Whether a rise in armed robberies and muggings; debates about the arming of the police; bag searches due to fears about terrorists planting bombs in museums and railway stations; or anxiety about the rioting on the streets of our cities; our Victorian ancestors faced precisely the same difficulties well over a century ago.

• Attacks on Police Officers: Between 2003 and 2013 not a single Metropolitan police officer was murdered, yet during a typical decade in the Victorian period, 1860 to 1870, nine officers were shot, stabbed or beaten to death in London.

• Victorian Gun Crime: So prevalent was the use of guns by criminals in Victorian Britain, that officers were routinely armed. The sight of a police constable with a revolver at his hip was a common one during the 1880s and 1890s.

• Terrorism: Bombs had exploded on the London Underground in 1883 and 1885, and the first death in a tube bombing occurred in 1897.

Will appeal to students of historical crime and those whose ancestors were involved in breaking or enforcing the law in the 19th Century.

Bombers Rioters and Police Killers by Simon Webb, is a fascinating and enlightening account of the reality of violent crime and disorder in Victorian Britain. It is an account which dispels these myths and lays bare that the crimes we see today were not only prevalent in Victorian Britain, but they were a significant part of Victorian life.

Historical true crime books can often fall victim to being very dry in their narrative, especially when discussing a range of offences from a particular period in history. They can get bogged down with so many facts, dates and details that your mind inevitable starts to wander. Bombers Rioters and Police Killers however, is quite the opposite. It is engaging and light in its explanations while still providing plenty of the detail you are looking for when reading about true crime.

Renowned British author Simon Webb takes a historical and comparative look at some of the most heinous criminal carnage in the British Victorian era.

While many identify the Victorian age as a period of elegance, style and sophistication essentially devoid of violent crime, Webb explains through nine chapters of appalling and vicious events that criminalistic behavior is hardly a phenomenon of recent years. In fact, the back cover of Bombers, Rioters and Police Killers contains this troubling line: “Between 2003 and 2013, not a single Metropolitan police officer was murdered, yet during a typical decade in the Victorian period, 1860 to 1870, nine officers were shot, stabbed or beaten to death in London.”

Webb documents acts of terrorism, street crime and mass murder within the pages of Bombers, Rioters and Police Killers. Included are stories detailing the slayings of police officers in the line of duty, the use of military to combat rioting and an entire chapter devoted to “Victorian London’s 9/11.”

Supplementing the stories of carnage and rampage are eight pages of photographs, which provide a pictorial perspective of the bloodshed documented in Bombers, Rioters and Police Killers.

The reader may be liable to lose track of whether modern of Victorian cases are being discussed, but the book's main point holds true - there are many similarities, and this book stimulates much thought.