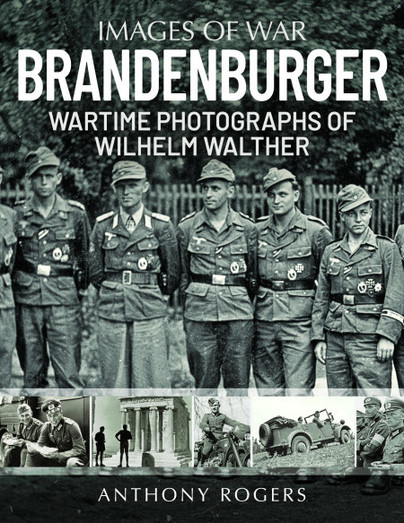 Add to Basket
Add to Wishlist
You'll be £14.99 closer to your next £10.00 credit when you purchase Brandenburger. What's this?
+£4.50 UK Delivery or free UK delivery if order is over £40
(click here for international delivery rates)

This offering from Pen and Sword is not you typical Images of War title with it covering one mans war, but that in itself increases its appeal. The picture quality varies through the title but with all photographs having their own appealing prospects.

Oberleutnant (lieutenant) Wilhelm Walther transferred from an armoured reconnaissance unit in March 1940 to the Bau-Lehr- Bataillon z.b.V. This unit was a forerunner of the Brandenburger (commandos). This book is not a pictorial history of the Brandenburger but that of a career officer who took his camera everywhere with him. Anthony Rogers who edited and wrote the book had originally interviewed Walther for another book. He has selected pictures from the 600 photographic collection he had kept as a career officer, whose career ended abruptly due to the loss of the war.

Rogers has organised the book, so it is in chronological order, so that we see Walther’s military career beginning in 1931. Where we saw the young Walther in training, wearing his dress uniform. We also see him on the Czech border in 1938, and then ‘invading’ the border area as part of the great betrayal of the country. There are plenty of pictures from the occupation of Bohemia and Moravia and the ‘welcome’ some gave the Germans.

There are pictures from the Balkans in 1941 where the Brandenburgers gained their reputation as ruthless commandos. After the Balkans we see them moved to the eastern front between 1941 and 1942. They were some of the lucky soldiers who were moved from the eastern front to Greece. We also Walther’s comrades at arms, other officers. We also see Walther’s war record. The last picture shows him visiting his comrades’ graves in 1991.

An excellent book and giving us access to pictures that would probably remain hidden forever.