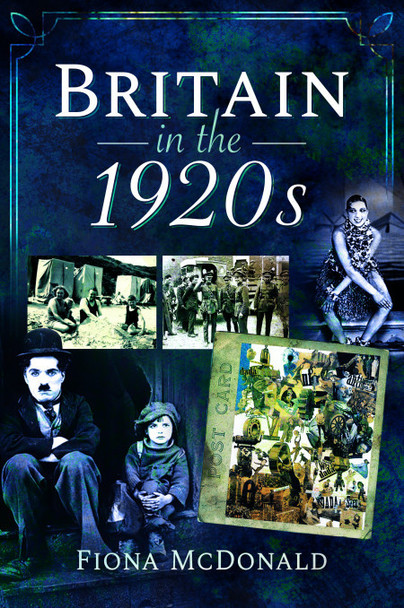 The war was over, new technologies and fashions were springing up; it was to be the beginning of a new and prosperous era and all was to be bright and joyous in Britain again.

In many ways it was: women were granted new freedoms and rights, motorcars became more accessible and houses were filled with electric gadgets.

But that was only one side of the story. High unemployment led to extreme poverty, workers were badly done by and inflation was high. However, there was a cure for all: jazz, that new upbeat music from across the Atlantic with its infectious rhythms and sensuous tones. Jazz took Britain by the hand and swung it well and truly into the twentieth century.

This book explores many different aspects of an amazing decade through its highs and lows; from innovations in swimwear to the invention of Winnie-the-Pooh, from the Great Strike of '26 to the Wall Street crash of '29 and the beginning of the Great Depression. Whether your interests are in fashion or politics there is something of interest for everyone in this accessible and entertaining work on all things related to Britain in the 1920s.

A rather comprehensive look at the period of time after World War I in Britain. Includes chapters on innovations in fashion, sex, dances, etiquette, etc. The portraits of perhaps lesser-known or "forgotten" figures are interesting.

I especially enjoyed the inclusion of political cartoons and advertisements of the era. Recommend this most to history buffs.

This was a wonderful read for me. Written in an informative chatty style full of nuggets of information. I really enjoyed visiting Britain. In the 1920s from my armchair will be following this author.

There's a straight-forward, unmeddled chapter for every facet and profiles of people within said facet, such as the progress of women in politics and positions of leadership, fashion, appearances, men’s experiences after WWI, raising children, toys and games, pop culture, ways of life in different parts of England, design, and technology.

This was a book that managed to pack a lot of information into small bits. I enjoyed reading this, as I learned a lot about the various events in Britain during this time, from the invention of Winnie the Pooh, which I have always been a fan of, to the impact that jazz had during a time of high unemployment and inflation. So many events happened during this period, some I knew about, but a lot I didn't. This is such an interesting time period and the author did it justice.

A nice and quick overwiew of Britain in the 1920's, with all its major developments and changes, from technical progress in production and transport to popular stars in British culture. All related to and influenced by the 1.. World War.
This is not a social study of the British society, but an entertaining glance at what determined the Roaring 20's in Britain, from car models to cocktail recipes.

I enjoyed this well written and informative read. I appreciated how it is organised and well researched.
It was an entertaining read that I recommend.

This book is exactly what the title says it is - a history of Britain in the 1920's. It is split into 4 parts - Society; Politics; Planes, Trains, and Automobiles; and Culture. The author's obvious interest in women and fashion ensure that part one is the largest by far. The 1920's was a fascinating decade full of change and this book serves as a good overview of it.

I love to read historical fiction, especially that taking place in Great Britain, so I was definitely interested in this volume, if nothing else to see how historically accurate some of the stories I had read were. I thoroughly enjoyed the trip through 1920s Britain.

Very interesting book to read. My grandmother was born in 1921, and it gave an insight to how life was for her during this time. Woman's rights were improving and the vote was finally available to her too.

Glad to of read It through and contains some very informative facts.

A very enlightening read of life in the 1920's. The author has clearly researched this decade an era that changed peoples lives and how they lived in the UK and across the rest of the world. It also sets how how the decade has had influence on our nation for the past hundred years. It covers many areas - women's rights, transport, politics, literacy, the arts etc etc, so the book can be used for specific subject matter. Thank you for allowing me to read this book

I’ve always been interested in this time period. It’s so fascinating how quickly the world changed and this book did a great job of showing how it changed.

I looooove these types of books and I never get tired of them.

I particularly enjoyed this one as it was very well detailed and easy to read. Some can get confusing to follow, but this one definitely wasn't.

Britain in the 1920s explores the many different aspects of an amazing decade through its highs and lows; from innovations in swimwear to the invention of Winnie-the-Pooh, from the Great Strike of '26 to the Wall Street crash of '29 and the beginning of the Great Depression. Whether your interests are in fashion or politics there is something of interest for everyone in this accessible and entertaining work on all things related to Britain in the 1920s.

The first, society, discusses life for men and women, social etiquette, and specifics such as food and drink (including recipes for champagne cocktails), sport and dancing. The second covers politics, both at home and on the world stage. A timeline at the beginning of the book provides quick reference for this context. The third section covers transport, in an age where aviation and motor cars were developing rapidly, but luxury liners still held much attention. The final part discusses culture, from the revolutions in art and literature to the popularity of jazz and film.
Throughout the book there are period pictures and extracts from books of the era, and the result is a rich and entertaining mix of popular history found during the ‘roaring twenties’.

A well-written and illustrated slice of social history from historian Fiona McDonald. The world, and Britain in particular, was changing rapidly and McDonald takes us expertly through those changes with a series of commentaries and well-chosen photographs. A fascinating read, not just for academics but for anyone with an interest in nostalgia and social history.

This is an easy to read companion to the decade, taking us from the first appearance of Rupert the Bear in the Daily Express to the DH Laurence’s (privately produced) Lady Chatterley’s Lover.
It is a useful book full of dates, events, social facts and even some personal anecdotes about the author’s family. Fiona McDonald looks at British life in fashion, diet, politics, sport, travel, culture and in the home in the years from the end of the First World War to the Wall Street Crash.
An excellent section covers the cinema, the major entertainment of the decade. McDonald of course features the big names, Fritz Lang and Alfred Hitchcock, but also includes entries on some of the neglected greats of British film, such as satirist Adrian Brunel and prolific director Maurice Elvey.
The book is scattered with fascinating facts, such as the revelation that the potato crisp became a popular food in the 1920s, with more than a million packets sold in 1928.