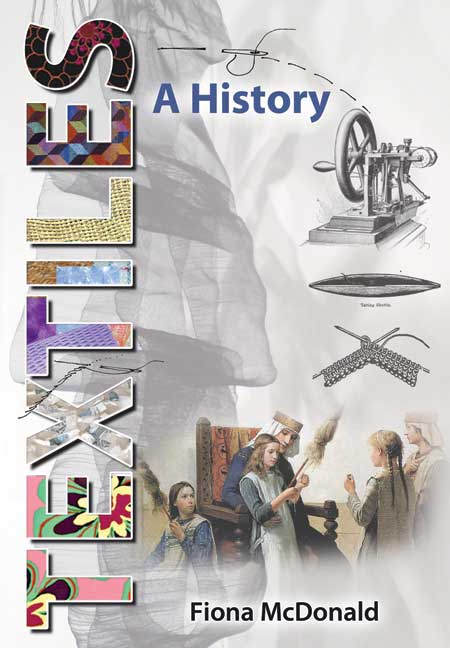 Click here for help on how to download our eBooks
Add to Basket
Add to Wishlist
You'll be £4.99 closer to your next £10.00 credit when you purchase Textiles: A History. What's this?
Need a currency converter? Check XE.com for live rates

A fascinating and accessible history of textiles, including the key personalities and inventions which revolutionised the industry, together with the East End workshops and the creation of artificial materials such as rayon. Textile expert, Fiona McDonald, includes tips on the care and repair of materials and advice on what’s worth collecting and the best materials to wear, as well as safe cleaning, tips on collecting. As well as a handy glossary of textile terms, there is an A-Z of different textiles, full of interesting facts – did you know that velvet was originally made from silk and its name derives from the Latin word, vellus, meaning fleece or that cabbage was the term used in the rag trade to refer to the extra outfits clever cutters created and sold off the books by careful placement of the pattern. A fascinating and often surprising subject area explored at an accessible but informative level.

Did you know?
• Peau de Soie is a heavy satin which was used for wedding dresses at the turn of the last century. The word satin is derived from Zaytoun, an area of China where it was first made
• We have lost many evocative names for colours over the years, including bouffon (darker than eau de nil) cendre de rose (grey with pink nuances), dust of Paris (ecru), esterhazy (silver-grey), fly’s wing (graphite) and terre d’Egypt (rust)