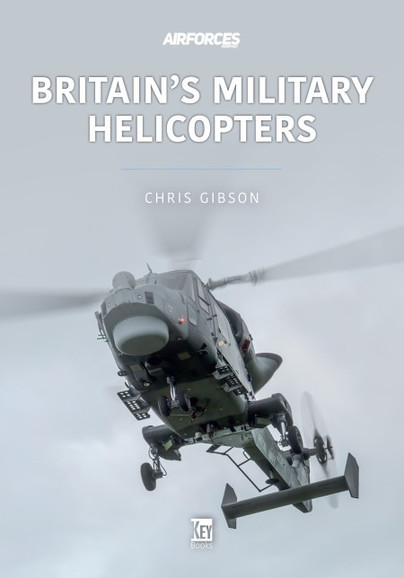 Preorder
Add to Wishlist
You'll be £12.79 closer to your next £10.00 credit when you purchase Britain's Military Helicopters. What's this?
+£4.50 UK Delivery or free UK delivery if order is over £35
(click here for international delivery rates)

A key component in any armed force, helicopters operate in a range of roles not only previously filled by aircraft but also many that are completely new. Thanks to their ability to go anywhere and operate from locations as diverse as landing pads hacked out of the rainforest or the pitching deck of a frigate, the helicopter adds a flexibility unknown to armed forces in the past. Be it anti-submarine operations by a Merlin, fire support from an Apache, stores delivered by a Puma, evacuation of the wounded by a casevac Chinook or rescue by a Sea King, helicopters offer the Royal Navy, British Army and Royal Air Force capabilities unheard of in the history of conflict.

From its beginnings as a curiosity with little operational use, Britain’s armed forces soon embraced the helicopter with the Whirlwind for the Royal Navy and RAF and the Skeeter for the Army Air Corps. Finding these helicopters limited, it was the advent of the turboshaft that revolutionised the helicopter, with the Belvedere, Wessex, Wasp and Scout bringing new capabilities. The next generation, the Puma, Lynx, Sea King and Chinook, all designed for turboshaft power, made the helicopter an essential machine for all the armed forces and have proven their worth to Britain’s forces since the 1970s. In Britain’s Military Helicopters, Chris Gibson describes the evolution of the helicopter in British service, from their beginnings with the Sikorsky R-4B test flown by Fleet Air Arm pilots in the USA to the latest Wildcat and Apache Guardian. Lavishly illustrated throughout, this book includes original photographs and images from archives, many of which are previously unpublished.

Educated at Auchinleck Academy in Ayrshire, Chris Gibson read Geology and Mineralogy at University of Aberdeen, graduating with Honours in 1984. Chris has worked in the oil exploration industry since 1985 and his work has taken him all over the world, with the added bonus of the occasional glimpse of unusual aircraft. In 1978, his interest in aircraft took Chris into the Royal Observer Corps where he represented his group, area and country in aircraft recognition competitions between 1980 and 1991. On the standing down of the ROC in 1991, Chris began researching historical aviation and has written several books on unbuilt projects, particularly guided weapons, transports and airborne early warning. Chris and his wife, Kirsten, live in the North East of England.