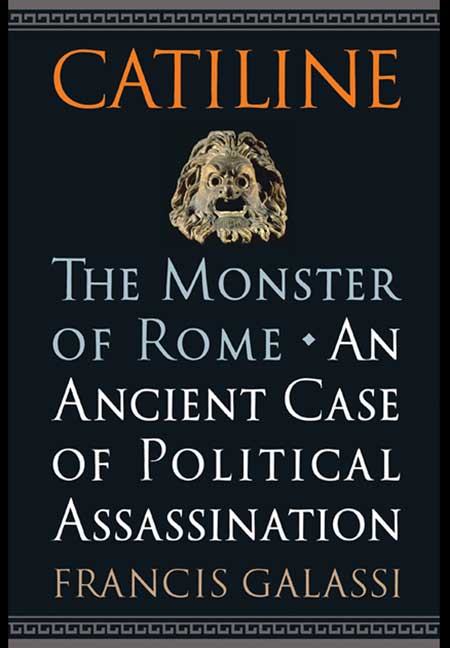 Catiline, The Monster of Rome (Hardback)

An Ancient Case of Political Assassination

Add to Basket
Add to Wishlist
You'll be £19.99 closer to your next £10.00 credit when you purchase Catiline, The Monster of Rome. What's this?
+£4.50 UK Delivery or free UK delivery if order is over £35
(click here for international delivery rates)

In 62 BC, Roman Senator Lucius Sergius Catiline lay dead on a battlefield in Tuscany. He was slain along with his soldiers after his conspiracy to overthrow the Roman Republic had been exposed by his adversary Cicero. It was an ignominious end for a man described at the time as a perverted, insane monster who had attempted to return his family to fortune and social standing. Chroniclers were not kind to Catiline, and his name over the centuries was synonymous with treachery. Recently, scholars have been reappraising the life and influence of this ancient
Roman. In Catiline, The Monster of Rome: An Ancient Case of Political Assassination, economic historian Francis Galassi provides the first book-length account of Catiline in more than a generation.

Rome first achieved a status as an empire during Catiline's lifetime. The republic was, however, constantly at war with foreign powers and occasionally its own allies, and the disparity between the wealthy and the poor threatened to destabilize society. Catiline was from an aristocratic but impoverished family and first served as an officer with Cornelius Sulla during that general's purges against Gaius Marius, the supposed champion of the oppressed masses. Catiline's goal was to serve Sulla
and then use that as a springboard to public office where he could recover his family's former wealth and honor. However, the senatorial elite became suspicious if not threatened by the upstart Catiline and blocked his ambitions. Catiline was dogged by trumped-up charges, including raping a Vestal virgin and murdering his brother-in-law; he was acquitted each time, but his political life was ruined. With citizens demanding land and agrarian reform, Catiline genuinely embraced their
dissatisfaction, and realizing that the elite would stop his attempt to gain status through elections, he organized a conspiracy to take control of Roman government through arms. Once his actions had been made public, many of his supporters and co-conspirators left him; but honoring the course he had chosen, he and his remaining soldiers fought a Roman army to their deaths. Rather than the “monster” as portrayed by his contemporaries, the author contends that Catiline was compelled to act for the benefit of common Romans to save Rome even if it meant
overthrowing the government. As Galassi notes, Catiline's contemporary, the slave Spartacus, has been a symbol of social reform for centuries, but it was actually Catiline, not Spartacus, who attempted to change Rome.