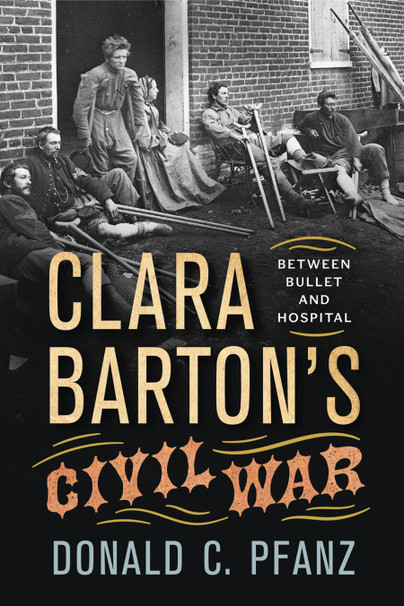 Between Bullet and Hospital

Add to Basket
Add to Wishlist
You'll be £25.00 closer to your next £10.00 credit when you purchase Clara Barton’s Civil War. What's this?
+£4.50 UK Delivery or free UK delivery if order is over £35
(click here for international delivery rates)

“I always tried to succor the wounded until medical aid and supplies could come up—I could run the risk; it made no difference to anyone if I were shot or taken prisoner.” So recorded Clara Barton, the most famous woman to emerge from the American Civil War. In an age when few women worked in hospitals, much less at the front, Barton served in at least four Union armies, providing food and assistance to wounded soldiers on battlefields stretching from Maryland to South Carolina. Thousands of soldiers benefit- ed from her actions, and she is unquestionably an American heroine. But how much do we really know about her actual wartime service? Most information about Barton’s activities comes from Barton herself. After the war, she toured the country recounting her wartime experiences to overflowing audiences. In vivid language, she described crossing the Rappahannock River under fire to succor wounded Union soldiers at Fredericksburg, transporting critical supplies to field hospitals at Antietam, and enduring searing heat and brackish water on the sun-scorched beach- es of South Carolina. She willingly braved hardship and danger in order to help the young men under her care, receiving in return their love and respect. Most of Barton’s biographers have accepted her statements at face value, but in doing so, they stand on shaky ground, for Barton was a relentless self-promoter and often embellished her stories in an effort to enhance her accomplishments.

In Clara Barton’s Civil War: Between Bullet and Hospital,

distinguished historian Donald Pfanz revisits Barton’s claims, comparing the information in her speeches with contemporary documents, including Barton’s own wartime diary and letters. In doing so, he provides the first balanced and accurate account of her wartime service—a service that in the end needed no exaggeration.

Pfanz gives us an excellent book which analyzes without emphasis the actions performed by Barton, and which makes us reflect on the fact that often a person's diaries, speeches or writings do not convey the whole truth and must be taken "with a pinch of salt", but nevertheless Barton's humanitarian gestures although her character betrayed self-promotion and a bit of narcissism remain of enormous importance for the history of the American Civil War and for humanitarian organizations from that event onwards.

This is a well-written book that, although produced to debunk myths and set the history straight, does not seek to assassinate Barton’s character. For students of the American Civil War, this is an interesting and thought-provoking read which will change some perceptions. Equally, for the reader of historical biography, this is a fascinating story of publicity seeking and the cult of personality in an age long before the internet and social media.

It is always good to read a civil war account of one particular family, in this case, Clara Barton’s Civil War presents the American Civil War in a new light, with a very personal account of that most explosive time in US history. More moving and revealing than official, drier accounts of the conflict.

DONALD C. PFANZ is a graduate of the College of William and Mary. In his thirty-two-year career with the National Park Service, he worked at Fredericksburg and Spotsylvania County Battlefields Memorial National Military Park, Petersburg National Battlefield, and Fort Sumter National Monument. He is a founding member of the Association for the Preservation of Civil War Sites (now the Civil War Trust) and has written six books about the Civil War, including Richard S. Ewell: A Soldier’s Life and War So Terrible: A Popular History of the Battle of Fredericksburg.