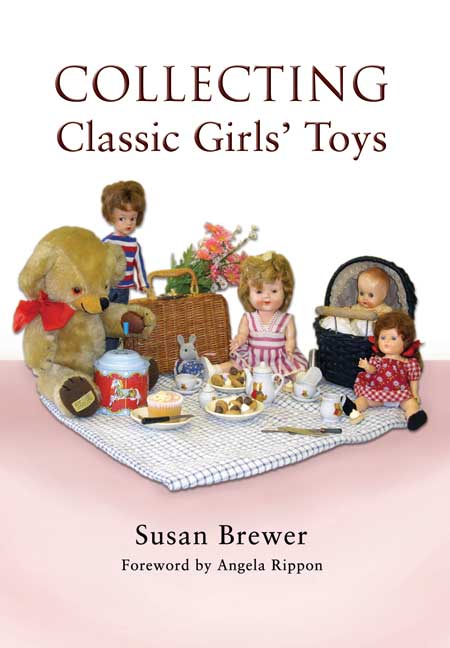 Click here for help on how to download our eBooks
Add to Basket
Add to Wishlist
You'll be £4.99 closer to your next £10.00 credit when you purchase Collecting Classic Girls Toys. What's this?
Need a currency converter? Check XE.com for live rates

Susan Brewer, the author of British Dolls of the 1950s and its follow-up, British Dolls of the 1960s, here turns to the world of girls' toys. In Victorian times, unless she came from a really wealthy family, a girl might possess a china doll or two, a spinning top, a hoop and a few other small toys. If her parents were rich, then maybe she would have a rocking horse and a doll's pram, while if the child's family were poor, she would be lucky if she owned a small wooden doll. What a contrast to today's young girls, who accumulate so many toys that many of them are scarcely played with.

The 1970s and 80s saw an influx of character toys – toys that often had their own invented world complete with
accessories, pets and friends. Strawberry Shortcake, Rainbow Brite, Care Bears, Flower Fairies Moondreamers and Lady Lovelylocks were just a few of these. There were also dolls such as Holly Hobbie, Sarah Kay and the enchanting Victoria Plum who accompanied the stories written by Angela Rippon. Angela has written the foreword for this book.

Susan devotes each chapter to a different subject; amongst the topics covered are 'Caring and Cooking', 'Houses and Homes', 'Traditional Toys', 'Cuddlies and Character Creatures' and 'Outdoor Play', and describes hundreds of different toys loved by young girls over the decades. Included is a wealth of fascinating detail as well as a directory of manufacturers. She also examines the 'pink' phenomenon, which has snowballed over the last few decades. Today, the colour pink seems to dominate the girls' toys' market – but boys' toys aren't all blue!

Here Susan Brewer turns her attention to the world of girls' toys. She reflects on Victorian times and how the child of a wealthy family might have a rocking horse and a doll's pram, whereas the child in a relatively poor family would be lucky if she owned a small wooden doll. What a contrast to today's girls, who accumulate so many toys that many of them are scarcely played with.

It will always remain a reference work to be consulted from time-to-time, it is also a good read from first page o last.
There are lovely little surprises as well, peppered with little nuggests of information and anecdote, who knew there was a board-fame called “Lively Polly the Fascinating Wash Day Game”! Or that Monday was traditionally the nation’s wash-day. If you are remotely interested in toys and their social history or the commercial histories of the companies that made them, you should add this book to your library.

This is a nostalgia-filled book that will appeal to readers of all ages, and is guaranteed to waft them back to their carefree- childhood days. It also poses the pertinent question, ' Why do manufacturers paint so many girls' toys pink?' Any female who was once a small girl will love this one!

In this book, Susan Brewer explores the fascinating world of girls toys: from the Victorian era, where children of a really wealthy family might possess a china doll, to modern-day bombardment and fascination with 'pink for girls'. Each chapter is devoted to a differing topic, including 'Caring and Cooking', 'Houses and Homes', 'Traditional Toys', 'Cuddlies and Character Creatures' and 'Outdoor Play', and contained within each are wonderful descriptions of hundreds of varying toys owned, and loved, by girls throughout the decades. Particular attention is paid to those toys of the 1970s and 80s, which witnessed a stark rise in the number of character toys, such as Care Bears. A wonderful book of nostalgia, and a wealth of knowledge to those with an interest in collectables.

Readers will probably be familiar with the style of Susan's books by ow. This has a similar approach, selecting prominent toys from different periods. The photographs are once again excellent, and there are plenty of them. Nostalgia, social history - it is impossible to put this book into any one category. Read it and muse.