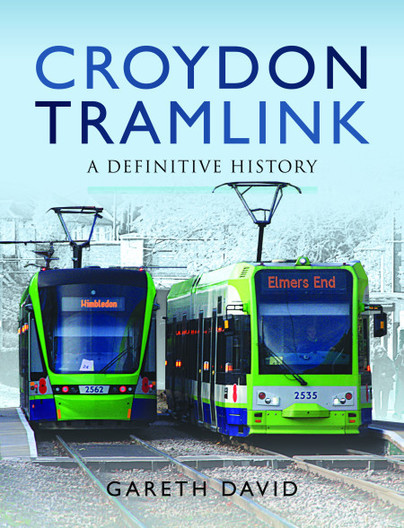 Add to Basket
Add to Wishlist
You'll be £30.00 closer to your next £10.00 credit when you purchase Croydon Tramlink. What's this?
+£4.50 UK Delivery or free UK delivery if order is over £35
(click here for international delivery rates)

Croydon Tramlink is a new history about the network linking Wimbledon with Croydon in South London.

This is the first full history of this fascinating tramway, which is about to celebrate its twentieth anniversary of opening.

The book looks at the political, economic and social aspects of the network, as well as the mechanical history of the system.

The tramway has been an important aspect in rejuvenating the Croydon area and improving transport links in an area lacking underground lines.

In the very readable narrative we learn of the careful behind the scenes work undertaken to gain the support of the principal local authority and BR, and the lengthy process of gaining parliamentary approval and securing the necessary capital funding. We also hear of the obstructive tactics of the bus lobby which prevented construction of a more passenger-friendly interchange at New Addington, surely an indictment of public transport policy and planning at the time.

The book is liberally illustrated with colour images, many showing the original red and white and current blue, green and white liveries worn by the light rail vehicles.

It's a very detailed book with lots of information about the process from inception to completion.

Croydon Tramlink is about the net linking Wimbledon with Croydon in south London. This book is the first complete story of this fascinating tram, which is about to celebrate its 20th anniversary of opening. The tram has been an important aspect to rejuvenate the Croydon area and improve transport connections in an area that lacks underground lines.

This great book by Gareth David is the ultimate guide to this means of transport. It contains everything you need to know it; construction, information and a lot of color photographs about it. Every tram fan should have it in his library.

This book is highly recommended for anyone with even a passing interest in Tramlink to find out just what went on in its creation as well as the various issues that have affected it over the past 20 years.