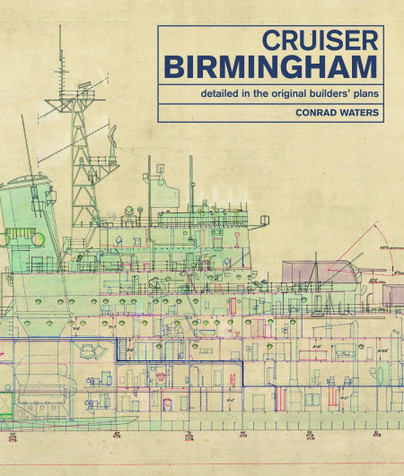 Add to Basket
Add to Wishlist
You'll be £30.00 closer to your next £10.00 credit when you purchase Cruiser Birmingham. What's this?
+£4.50 UK Delivery or free UK delivery if order is over £35
(click here for international delivery rates)

Today these plans form part of the incomparable collection of the National Maritime Museum at Greenwich, which is using the latest scanning technology to make digital copies of the highest quality. This book is one of a series based entirely on these draughts which depict famous warships in an unprecedented degree of detail – complete sets in full colour, with many close-ups and enlargements that make every aspect clear and comprehensible. Extensive captions point the reader to important features to be found in the plans, and an introduction covers the background to the design.

HMS Birmingham was selected for the series because this famous interwar ‘Town’ class cruiser is unusually well documented. Unusually, three separate sets of plans survive – as completed in 1937, as refitted in 1943, and as modernised in 1952 – which allows this novel form of anatomy to cover the whole of the ship’s long career.

I found this book interesting for two different reasons. The first is the obvious one – looking at the detailed layout of the major systems of the cruiser – exactly how the guns and their supply systems worked, how the engines were laid out and so forth. The second is the fascinating trivialities of live on these warships – from the Rum store to an entire room dedicated to storing the instruments for the ship’s bands, or the constant attempts to find more places for the crew to sling their hammocks. These two threads also reflect the two competing aspects of warship design – these ships were both powerful weapons of war and floating communities. In the case of cruisers floating communities that were expected to be self sufficient, so we see large workships and stores of spares to allow her to keep operating away from base for long periods of time, and impressive Admiral’s quarters, to allow the ship to act almost as a floating British Embassy. This book really helps bring this ship to life, allowing us a glimpse inside her that is rarely possible with photographs.

The quality of the book is such that one can spend many happy hours studying the wealth of detail in the beautifully reproduced coloured plans as one metaphorically “wanders” through the ship. As a cruiser “fan” I thoroughly enjoyed this fascinating volume which depicts a hard-worked warship that I can remember visiting when I was growing up in Portsmouth. Recommended.