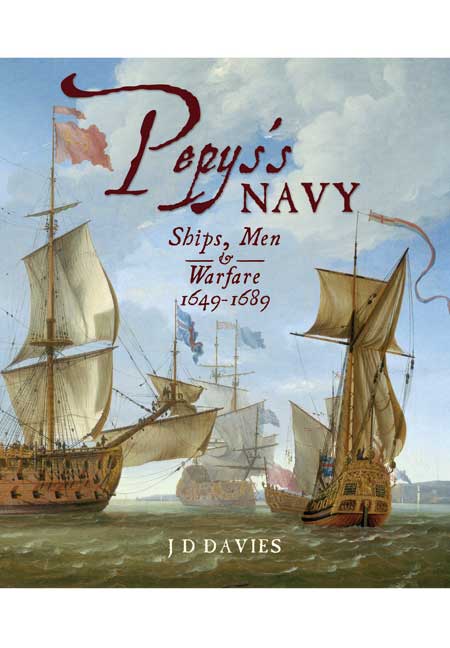 You'll be £8.00 closer to your next £10.00 credit when you purchase Pepys’s Navy. What's this?
Need a currency converter? Check XE.com for live rates

Pepys’s Navy describes every aspect the English navy in the second half of the seventeenth century, from the time when the Fleet Royal was taken into Parliamentary control after the defeat of Charles I, until the accession of William and Mary in 1689 when the long period of war with the Dutch came to an end. This is a crucial era which witnessed the creation of a permanent naval service, in essence the birth of the Royal Navy.
Every aspect of the navy is covered – naval administration, ship types and shipbuilding, naval recruitment and crews, seamanship and gunnery, shipboard life, dockyards and bases, the foreign navies of the period, and the three major wars which were fought against the Dutch in the Channel and the North Sea. Samuel Pepys, whose thirty years of service did so much to replace the ad hoc processes of the past with systems for construction and administration, is one of the most significant players, and the navy which was, by 1690, ready for the 100 years of global struggle with the French owed much to his tireless work.
This is a hugely significant book for historians, naval enthusiasts and for all those with an interest in Pepys and this colourful era of the seventeenth century, and a new affordable paperback edition will be widely welcomed.

Davies’ own book on the other hand is strictly factual and would be an indispensible reference source for any regular Pepys reader. It is thoroughly researched, clearly organised, rigorous and detailed. I think Pepys would have loved it; in some ways it is the book he never wrote. I heartily recommend it.

The Diary of Samuel Pepys

The readable text and affordable price of this edition will further increase its accessibility to scholars and nonscholars alike, who will eagerly sign on for the passage.

A first class reference book as well as a great visual record of forty years of naval history. Recommended to all.

As my Grandfather used to say when finishing a meal 'Well that's filled a gap!' This excellent book will fill a gap on many bookshelves covering, as it does, a fascinating period of naval development. It is well researched, beautifully illustrated and written in an easily read manner. By all means read it from cover to cover as I did but it will be found just as enjoyable if the reader dips in at any section. For anyone following through any themes in the history of the navy there is a bonus in that the author has tried to follow the layout of Brian Lavery's seminal work Nelson's Navy in order to compare and contrast the navy in these two significant periods of its history. This book is an impressive piece of work and is thoroughly recommended

This book is excellent, verging on outstanding. If the Navy’s history interests you buy this book. If it doesn’t, shame on you and buy this book.

This fine book covers all aspects of the English navy in the second part of the 17th century, from the period when the fleet came under parliamentary control after Charles I’s defeat, until the accession of Mary and William of Orange in 1689 when the long period of war with the Dutch ended.

This is the era that begat a permanent Royal Navy in the modern sense of the word.

The book covers shipbuilding, the types of ships used, dockyards, administration, the foreign navies and the three major wars which were fought against the Dutch in the Channel and the North Sea.

It is proper that this fine book is named after Samuel Pepys, who, in his thirty years of service, did a great deal to innovate and improve the navy, readying it for a century of struggle with the French.

This book is essential for anyone with an interest in the Royal Navy, the Civil War and Restoration period, and indeed Pepys himself. Indeed, this book truly deserves the Samuel Pepys award it has won.

This gorgeously illustrated book describes the English navy in the second half of the seventeenth century, from the time when the Fleet Royal was taken into Parliamentary control after the defeat of Charles I, until the accession of William and Mary in 1689. This crucial era witnessed the creation of a permanent naval service, in essence the birth of the Royal Navy. Davies’s coverage is comprehensive – naval administration, ship types & shipbuilding, naval recruitment & crews, seamanship & gunnery, shipboard life, dockyards & bases, the foreign navies of the period, and the three major wars which were fought against the Dutch in the Channel and the North Sea.

JD Davies' definitive work on the British Navy in the second part of the 17th century looks in great depth at the various aspects of naval matters from the different forms of recruitment, shipbuilding and the different types, life at sea, and the all-important gunnery. It was a time when the Navy became a more professional body and fought three major wars against the Dutch.

The sections describing tactics and battle provides some fascinating atmosphere of what it was like taking part in naval warfare with contemporary illustrations adding further character. Individual chapters describe the battles of Scheveningen, Lowestoft, and the Texel, putting the reader in the picture.

First published in 2008 - and winning the Samuel Pepys Prize and Latham Medal the following year - this reprint will doubtless impress a new raft of readers.

The book is beautifully written, as one might expect from such an accomplished author and historian... This is an indispensable volume for anyone interested in the period, its ships or the development of the sailing navy into the formidable force it became at the height of its might and influence.

This superb books deals comprehensively with possibly the most tumultuous period in our country's history........ This is not only an impressive technical publication to satisfy the dedicated researcher, it is also a jolly good read for the enthusiast.