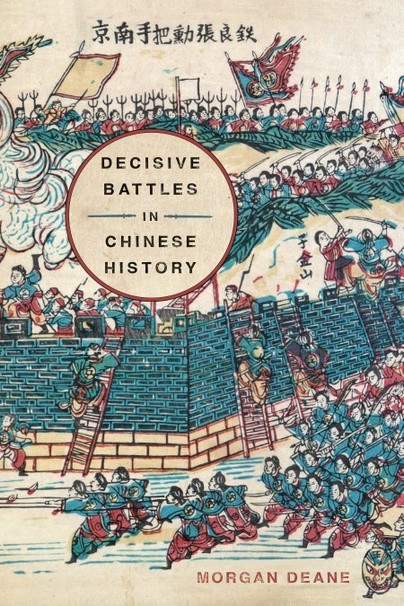 Add to Basket
Add to Wishlist
You'll be £25.00 closer to your next £10.00 credit when you purchase Decisive Battles in Chinese History. What's this?
+£4.50 UK Delivery or free UK delivery if order is over £40
(click here for international delivery rates)

The study of Chinese battles faces many hurdles that include different spelling systems, a haze of seemingly impenetrable names, places, and ideas, and different approaches to recording history. Early indigenous Chinese histories were written by Confucians with an anti-military bias, and used rather laconic phrases to describe battles. These accounts were then transmitted to Jesuit missionaries who shared the Confucian disdain for martial matters. The modern discipline of history developed in the West during a time of particular Chinese weakness and political division, resulting in the lack of parallel material. Decisive Battles in Chinese History by Morgan Deane overcomes these obstacles to present the vast span of recorded Chinese history through key battles, from Maling fought in 342 BC during the Warring States period, to Hengyang in 1944, that marked the end of major Japanese operations in China. Each of the twelve chapters highlight a significant conflict that selectively focus on unique Chinese characteristics of the time, including belief systems, ruling ideology, the connection between technology and warfare, military theory, political events and rulers, and foreign policy, including China’s eventual interaction with the West. The book pushes back on a variety of ideas and stereotypes, ranging from the Chinese use of gunpowder, their supposedly weak reaction to the West, the viability of the Dynastic Cycle in studying history, the context of their military theory, the exclusivity of martial and cultural spheres, and the uniqueness of Western imperialism. It also offers a groundbreaking reassessment of Mao Zedong’s leadership and his impact on the development of guerilla warfare. In a world filled with disturbing reports of conflict and potential warfare, Decisive Battles in Chinese History offers a unique addition to students, historians, and general readers wishing to better understand Chinese history.

The author goes on to make a case for the rehabilitation of the Chiangm Kai-shek’s reputation and a rebalancing of views on Mao Zedong’s legacy (a line of attack that is unlikely to do much for his chances of publishing a Chinese language version of this fascinating book!.The arguments are well made though and this short book is an easy read.
Some of the ideas are underdeveloped but to do this topic real justice a much weightier tome would be required. For this reviewer, there is
enough in this book to force a rethink on the topic of Chinese military history notwithstanding the brevity of the content. Recommended.

MORGAN DEANE is a military historian and free-lance author. Literate in Chinese, he earned an M.A. in history from Norwich University and studied at Kings College London. His military analysis and political commentary has been published in numerous outlets, including Fox News, Washington Examiner, Las Vegas Journal Review, and Salt Lake Tribune.