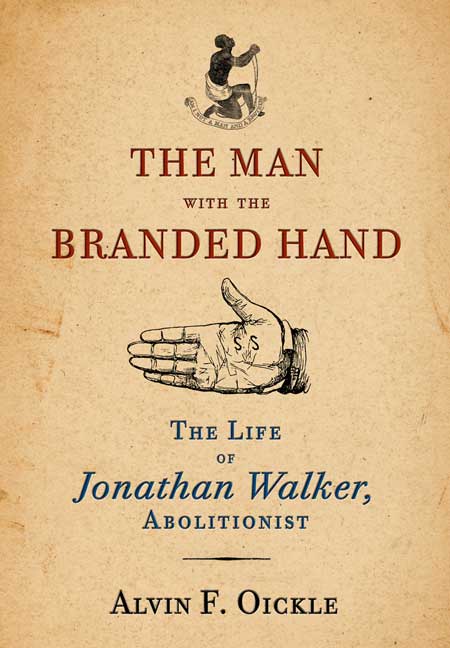 The Man with the Branded Hand (Hardback)

The Life of Jonathan Walker, Abolitionist

Add to Basket
Add to Wishlist
You'll be £25.00 closer to your next £10.00 credit when you purchase The Man with the Branded Hand. What's this?
+£4.50 UK Delivery or free UK delivery if order is over £35
(click here for international delivery rates)

Sailing around the Florida Keys in 1844, forty-five-year-old Jonathan Walker had a price on his head. On board the small boat he had built that winter in Alabama were seven fugitives from slavery. The Cape Cod sailor and abolitionist was wanted in Pensacola, Florida, for his crime: stealing slaves. The slaves’ owners had posted $100 each as reward money for their property and $1,000 for Walker’s apprehension. Only a day’s sail from their goal of
freedom in British-controlled Bahamas, Walker and the slaves were stopped and seized by bounty hunters and taken to a Key West court. Ordered back to Pensacola for trial, Walker ended up spending a year in jail. He was fined and
sentenced to stand in the pillory; in addition, he was to suffer a unique punishment in American history: while a packed courtroom watched, a United States marshal was ordered to use a hot branding iron to burn the letters SS,
for “slave stealer,” into Walker’s right hand.

Walker survived his ordeal, spending much of his incarceration in isolation. Once released, he remained active in the antislavery movement even while he and his devoted wife Jane raised their nine children. His attempt to help
form a new colony in Mexico for runaway American slaves also led to punishing experiences for Walker and one of his sons. Living later with his family in Plymouth, Massachusetts, in the years before the Civil War, Walker made
room in his crowded house to shelter runaway slaves along the Underground Railroad. He participated in abolitionist lecture tours across the North where Greenleaf Whittier’s poem “The Branded Hand”—to astonished audiences.

Too old to enlist in the Civil War, Walker instead headed to Virginia in the war’s final year to help educate African Americans fleeing Confederate forces. In The Man With the Branded Hand: The Life of Jonathan Walker, Abolitionist, distinguished journalist Alvin F. Oickle relates this entire remarkable story of a life devoted to the supposition that “all men are created equal.”