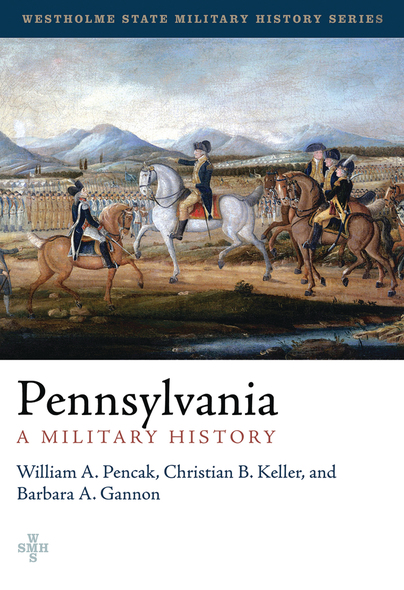 Add to Basket
Add to Wishlist
You'll be £17.50 closer to your next £10.00 credit when you purchase Pennsylvania: A Military History. What's this?
+£4.50 UK Delivery or free UK delivery if order is over £35
(click here for international delivery rates)

Founded in 1682 by a society that had no military, eschewed violence as a means of solving conflicts, and tolerated a wide variety of religions, Pennsylvania began as a “peaceable kingdom”—but war was essential to both Pennsylvania’s founding and its history. Pennsylvania was the site of some of the most important military events in American history, including the destruction of the Braddock Expedition, the battles of Brandywine and Germantown,Valley Forge, the Whiskey Rebellion, and the Battle of Gettysburg. Pennsylvania was also a leader in America’s modern wars, with the Pennsylvania-based 28th Infantry Division serving with distinction in both world wars as well as in Iraq, and the state’s industry, particularly steel production and ship building, being essential to the natinal effort. Complete with a list of historical sites and a comprehensive bibliography, Pennsylvania: A Military History is an important reference for those interested in the role of the Keystone State in our nation’s wars.

About BARBARA A. GANNON

BARBARA A. GANNON is assistant professor of history at the University of Central Florida and has written on Pennsylvania and various military
history subjects.

About CHRISTIAN B. KELLER

CHRISTIAN B. KELLER is professor of history in the Department of National Security and Strategy at the United States Army War College, Carlisle, Pennsylvania. He is author of a number of books and articles on the Civil War, including Damn Dutch: Pennsylvania Germans at Gettysburg.

About WILLIAM A. PENCAK

WILLIAM A. PENCAK (1951–2013) was professor emeritus of history at Pennsylvania State University. He is the author of many articles and books, including Pennsylvania: A History of the Commonwealth, and was editor of Pennsylvania History: A Journal of Mid-Atlantic Studies.