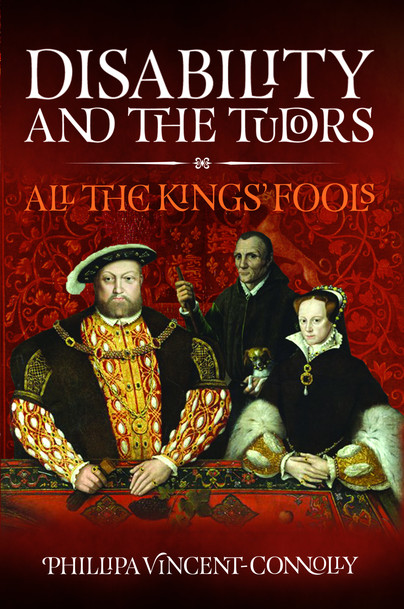 Disability and the Tudors (Hardback)

All the King's Fools

You'll be £20.00 closer to your next £10.00 credit when you purchase Disability and the Tudors. What's this?
+£4.50 UK Delivery or free UK delivery if order is over £35
(click here for international delivery rates)

Throughout history, how society treated its disabled and infirm can tell us a great deal about the period. Challenged with any impairment, disease or frailty was often a matter of life and death before the advent of modern medicine, so how did a society support the disabled amongst them?

For centuries, disabled people and their history have been overlooked - hidden in plain sight. Very little on the infirm and mentally ill was written down during the renaissance period. The Tudor period is no exception and presents a complex, unparalleled story. The sixteenth century was far from exemplary in the treatment of its infirm, but a multifaceted and ambiguous story emerges, where society’s ‘natural fools’ were elevated as much as they were belittled.

Meet characters like William Somer, Henry VIII’s fool at court, whom the king depended upon, and learn of how the dissolution of the monasteries contributed to forming an army of ‘sturdy beggars’ who roamed Tudor England without charitable support. From the nobility to the lowest of society, Phillipa Vincent-Connolly casts a light on the lives of disabled people in Tudor England and guides us through the social, religious, cultural, and ruling classes’ response to disability as it was then perceived.

Phillipa Vincent-Connolly is a historian, writer, author, consultant, and broadcaster, who qualified in History and Humanities with the Open University in 2011. She has written both historical fiction and non-fiction. Phillipa is currently working towards achieving her PhD in History, specialising in Tudor disability, at Manchester Metropolitan University. Among her many interests, she has a deep and abiding love for all things historical: archives, artefacts, architecture, corsetry, fashion, and royalty. Phillipa is also a keen activist, wanting untold disabled voices of the past to be heard, by bringing them into the mainstream. Being disabled with cerebral palsy, Phillipa has an interest in disability equality. She lives in Poole, Dorset, the UK with her two boys.