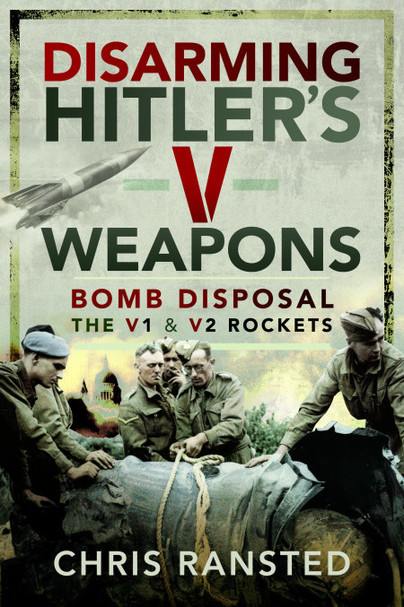 Add to Basket
Add to Wishlist
You'll be £15.99 closer to your next £10.00 credit when you purchase Disarming Hitler's V Weapons. What's this?
+£4.50 UK Delivery or free UK delivery if order is over £35
(click here for international delivery rates)

In 1944 the V-1s and V-2s, Hitlers vengeance weapons, were regarded by the Allied leaders in London as the single greatest threat they had faced. It was feared that these flying bombs and rockets might turn the tide of war once again in Germanys favour. Yet, little more than half of these missiles hit their targets, some failing to explode. Their wreckage lay across the southern half of England or in Europe, with contents liable to sudden and deadly ignition. It was the job of specialist Bomb Disposal teams to render the V-weapons safe and uncover their secrets. This is their story. In this unique book Chris Ransted has investigated the work of these unsung heroes who risked their lives every time they were called into action and, in the course of his research he has located the sites of many of the unexploded V-weapons, revealed here for the first time. Mr Ransted also details the methods used by the Bomb Disposal men and the equipment they used. The book is richly illustrated with 266 photographs and diagrams, many of which have never previously been published. In completing this, the most comprehensive study of its kind, the author describes the deeds of those gallant Bomb Disposal men that were awarded one of the highest honours which could have been bestowed upon them by their country the George Medal.

Well illustrated throughout with archive images, diagrams and maps, I found this fascinating reading. Definitely recommended for anyone with an interest in the history of the V-weapons of WW2.

I have read prior books on Nazi raids on Britain before. Those books have mentions V1 and V2 bombs but did not focus on BD team.

>From prior knowledge of Nazi history, this book helped me understand the terror people faced during this era. The bombs were large in size and destructive by impact. The BD team spend uncountable times to defuse these bombs without harm. Many have lost lives, learning to defuse the bombs.

I really enjoyed this book. The information is well researched and focused on V1 and V2 bombs. It gives homage to the BD team who gave up their time and sacrifice to clean up communities where bombs have fallen.

In addition, there are pictures of the actual bombs in the book.