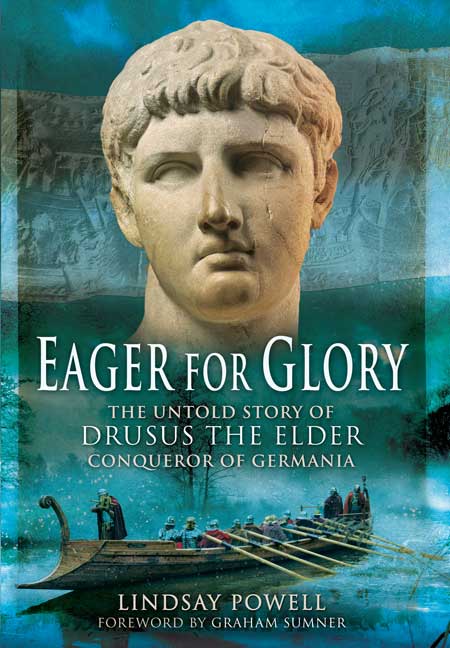 The Untold Story of Drusus The Elder, Conqueror of Germania

Click here for help on how to download our eBooks
Add to Basket
Add to Wishlist
You'll be £4.99 closer to your next £10.00 credit when you purchase Eager for Glory. What's this?
Need a currency converter? Check XE.com for live rates

Drusus the Elder (Nero Claudius Drusus) was regarded by the Romans as the first conqueror of Germania (western Germany) and a hero in the mould of Alexander the Great. Yet there has never been a full volume dedicated to his remarkable story, achievements and legacy. Eager for Glory brings this heroic figure back to life for a modern audience.

Drusus was a stepson of Augustus, the first Roman emperor, through his marriage to Livia. As a commander he led daring campaigns by sea and land that pushed the northern frontiers of Rome's empire to the Elbe River. He oversaw one of the largest developments of military infrastructure of the age. He married Mark Antony's daughter, Antonia, and fathered Germanicus, the Empire's most popular general, and the future emperor Claudius. He died when he was only 29 and was revered in death.

Eager for Glory is an objective and thoroughly researched account, written in a lucid narrative style which reveals author Lindsay Powell's passion for the period.

Like so many Roman figures of the Imperial age our sources for the life of Drusus are frustratingly limited. He was the subject of two biographies written by members of his own family, but neither survives, so Powell has to piece together his life from later sources. Even Livy's work on this period is lost. Powell makes the excellent decision to include an appendix dedicated to a description of his sources, discussing both the nature of the source and the light it shines on Drusus.

The result is a useful biography of an important figure during the birth of the Imperial Rome.

This ground-breaking book will appeal to all interested in ancient world history, biography, military history and adventure stories, but will be of particular interest to those studying classics in academia, Roman period re-enactment and numismatics.

A real pleasure to read a book that is a page-turner for anyone interested in Ancient Rome!

An historian with a passion for ancient military history stormed into Wokingham last week to talk about his latest book.

Lindsay Powell was invited to talk about his publication Eager for Glory: The Untold Story of Drusus the Elder, Conqueror of Germania, to an audience at Wokingham Library in Denmark Street on Thursday, September 1.

The book documents the life of Roman politician and soldier Drusus the Elder – whose real name was Nero Claudius Drusus – who was the first Roman general to begin the conquest of Germania, which is better known today as Germany.

Mr Powell, who shares his time between the borough and Texas in the United States, where he works as a communications manager for 3M, explained the idea for a book about Drusus came when working on another project.

He revealed his surprise when learning no books about the general had been written since the Roman times, which provided him with the catalyst to put the initial project on hold and begin researching the life and times of Drusus the Elder.

The 50-year-old said: “The last person to tell stories [about Drusus] unbelievably was back in the Roman times and historians can be quite lazy and prefer to write about people like Julius Caesar and tend not to look at people in the second or third row of a football team, if you like.

“But they have some damn good stories to tell.

“Why tell stories of imaginary people and battles when there are real people whose exciting stories have yet to be told?

“In short it is a rip-roaring yarn and tale of a young man growing up at a critical period in history. It is the story of a soldier, explorer, diplomat, builder and genuine Roman hero who is revered in death.

“I think it is a thrilling story.”

Mr Powell is now busy penning a book about Drusus’ son Germanicus Caeser, whose story, he believes, is also largely unknown to the masses.

Powell gives a solid account of the life and times of Drusus with an enviable lightness of literary touch. More to the point, he pulls off the difficult task of putting Drusus' career into the context of the political machinations of the early empire.

Where his account truly comes to life is in the military details. Powell clearly understands both the psychology of the Roman soldier and the practical issues of day-to-day life in the military in nuanced detail.

This is a remarkably readable book. We don't know a lot about Drusus, and most of the accounts of his campaigns are lost, but Lindsay Powell gathers together what there is and produces a coherent account. Thus we have the story of the life of Drusus, an outline of his campaigns, an attempt to estimate which legions were involved, his death and legacy. Given the state of the evidence, it is impossible to provide 'orders of battle' for the participants in these campaigns, but the author does try to give as much detail as possible with regard to the participants, with photographs of re-enactors and the terrain. The author also looks at the reasons for the Romans deciding to stop and set the Rhine rather than the Elbe as a frontier, a decision of long-tern historical significance. A nice book that I enjoyed.

Eager for Glory is worthy of a place on the shelf of any ancient warfare fan. It is warmly recommended.

Military biographies tend to be written by the same historic figures over and over again. There are dozens of books devoted to men like Julius Caesar, George Washington, Theodore Roosevelt, etc. There is a popular interest in such famous personalities, and there are ample resources on which a biographer can base his research. In Eager for Glory Lindsay Powell chronicles the life of an important Roman leader who has been unfairly neglected by history.

Eager for Glory gathers the scattered evidence of Drusus' life and presents as near a complete story as can be told. The last person to write a biography of Drusus was the Emperor Augustus himself. Sadly, that text was lost to history. There is no surviving autobiography as Caesar has left us, nor are there full accounts written by ancient historians such as Plutarch or Tacitus. Yet, there are some short references to Drusus among ancient writings. Powell pieced these with his deep knowledge of the the Roman military, recent archaeology, and the general history surrounding Drusus' life. The gaps are filled with Powell's own intriguing theories.

The text begins with a discussion of Drusus' early life in the imperial family. As a young adult he enters politics. At age 22 Augustus puts him in command of the Roman operation to conquer the Alps. This was the Bellum Alpinum (aka Bellum Noricum) against the Raeti. I have seen this war briefly mentioned in other Roman military books, so I was very interested to read Powell's detailed account. Those readers unfamiliar with the Roman, Celtic, and German ways of war are supplied with backgrounds on the respective armor, weapons, equipment, tactics, etc. Speaking of armor, Roman history buffs will be interested to see how Powell ties the introduction of segmented armor to Drusus' own legions. After the conquest of the Raetians, Drusus is rewarded with a governorship of Gaul.

Although technically provinces of Rome, the three Gauls are still a fertile land for rebellion. Through clever diplomacy, Drusus diffuses a potential revolt. He then responds militarily to violent incursions from German neighbors. The unstable border encourages Augustus to subdue and assimilate the people East of the Rhine. Powell narrates the daring exploration and long-distance combat of Drusus' Bellum Germanicum. At the book's end we learn of Rome's reaction to Drusus' unexpected death, his (until recently) fading legacy, and an assessment of the man. Eager for Glory is an engaging story of a worthy, yet forgotten Roman commander.

P.S. Other reviewers have grumbled that the figure numbers in the text don't match the photos. This really isn't much of a problem as it is easy to figure out which image his writing refers to.

P.P.P.S. By the end of this year we can expect Powell's next book, a biography of Germanicus. Agrippa comes after that. It's looking to be a nice series of accomplished and overlooked Roman generals.

Admitting the sparsity of evidence directly related to Drusus, Powell...has nonetheless done an excellent job. The result is a surprisingly detailed, readable look at a long-forgotten great captain, with some thoughtful insights into the Roman concept of strategy, worth reading not only for those interested in Roman history but also for students of military leadership.

Eager for Glory: The Untold Story of Drusus the Elder, Conqueror of Germania