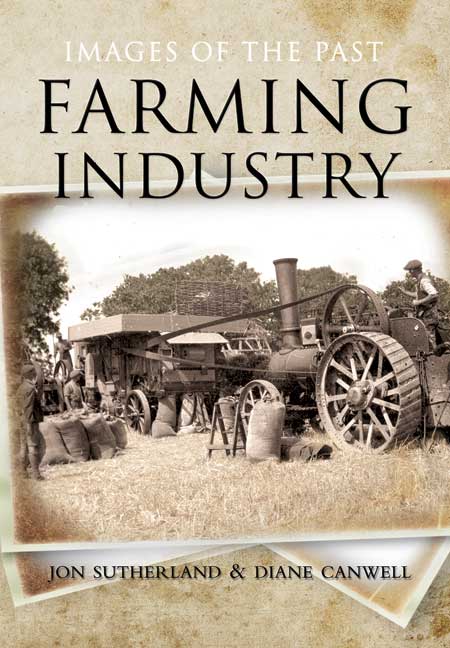 Click here for help on how to download our eBooks
Add to Basket
Add to Wishlist
You'll be £4.99 closer to your next £10.00 credit when you purchase Farming Industry. What's this?
Need a currency converter? Check XE.com for live rates

Working with prestigious archives of contemporary photographs, the authors chart the history of Britain's farming heritage with 120 rarely seen photographs. Nearly eleven thousand years ago humans moved away from hunting and gathering and began to raise livestock and plant crops. Our nostalgia for the way the countryside had been is an enduring passion. Ultimately mechanisation began to replace more traditional forms of farming, and the Industrial Revolution was drawing more and more people away from the fields. Photography emerged at a crucial time when farming tasks could be done with a speed and on a scale previously unimaginable. Farming history has been driven by experimentation, innovation, and invention. The 19th century was one of those times marked by such change. This book looks at that pivotal period in history after which the British countryside would never be the same.

Jon Sutherland and Diane Canwell have written over 200 books, their titles winning awards such as New York Libraries Best of Reference, Booklists Editor's Choice and the Portsmouth Book Award. As East Anglians, their roots are firmly in Britain's farming and fishing heritage, both with strong family ties to these two most traditional industries. The authors have written a wide range of titles including social and military histories, they have worked closely with archives and museums in selecting photographs for these two new titles.

There are fascinating images of haymaking and ploughing, making cheese and grinding corn, cutting peat turfs and shoeing horses, as well as rural people at leisure.

The Agricultural Revolution of the mid-18th century dramatically transformed the growth in population in England, from 5.7 million in 1750 to 16.6 million a century later. Changes in the types of crops grown, the yield of the crops and the use of the land itself were to alter the fortunes of Britain and Ireland forever.

By the late 19th century the medium of photography had been invented, making it possible to grab snapshots of the rapidly changing way of life in rural communities. In this book the authors have outlined six separate chapters, the first four covering the nature of farming in England, Wales, Scotland and Ireland from the late 19th century onwards, depicting a variety of lost crafts, traditions and techniques, whilst the final two depict further English images from one private collector of more typical farming scenes or gathering in the crops and more. Each image is accompanied with a lengthy description and historical context against which the picture is taken

Discover My Past England

These photographs are some of the 120 that have rarely been seen but now appear in a new book Images of the past: Farming industry by Jon Sutherland and Diane Canwell.

The paperback pictorially traces some of the developments in agriculture since the start of the 20th Century in a nostalgic,
rather than a scientific, way. We see some early machinery at work and witness some of farming’s lost skills being practised. Each photo is accompanied by a full and informative caption, even though some of the details have been lost over time.
The paperback has five distinct sections: one each for farming at the turn of the 19th century in England and Scotland, one each for Irish and Welsh farming in the late 19th Century, farming in the 1930s and a final chapter on 1930s rural England
which offers some village photos and pictures of road making and repair in Hertfordshire.

Tractor interest is limited, given the time span of the publication, but there are enough photos of them – and farm machinery –
to make it an interesting publication for supporters of early vehicles. For enthusiasts of historical farming or country life it is, of course, a valuable source of pleasure.