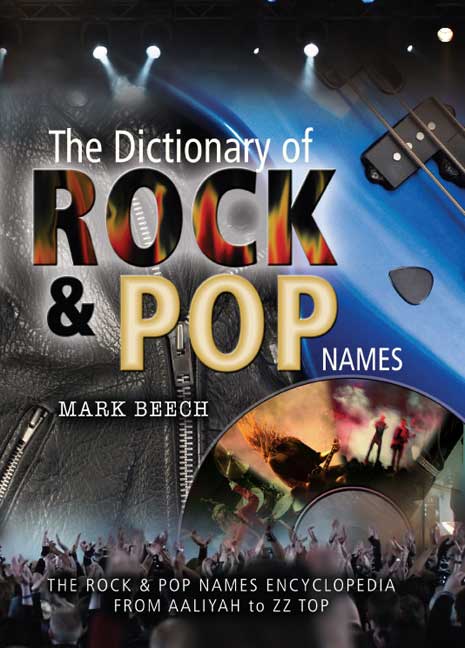 Why are they called that? From Aaliyah to ZZ Top

Click here for help on how to download our eBooks
Add to Basket
Add to Wishlist
You'll be £4.99 closer to your next £10.00 credit when you purchase The Dictionary of Rock & Pop Names. What's this?
Need a currency converter? Check XE.com for live rates

Mark Beech's 1998 predecessor, The A-Z of Names in Rock generated over 50 radio interviews, 15 articles, 7 features in nationals and two serialisations. This extended and updated version covers more genres than just rock (e.g. pop, punk, indie, reggae, soul, country, blues, folk, jazz, heavy metal, grunge and rap artists and bands) and will appeal to music fans internationally, as well as being the must-buy book for pub quiz fans. With almost 3,000 entries, it's a chance to discover why artists chose their names - and which ones shouldn't have. An informative and often humorous read, 'the world's leading expert on music names' (BBC), Mark Beech, is guaranteed another best-seller.

* The Kinks
Ray Davies said it was in honour of their 'kinky boots, similar to those worn by Honor Blackman in The Avengers'

After interviewing thousands of the world’s best-know musicians, Mark Beech has managed to collect and collate an anthology of band, star, and music label names and nicknames in this A – Z of names in the business. From Aaliyah to ZZ Top, this edition not only includes the entries of rock and pop, but also cites tags from the realms of indie, soul, reggae, jazz, punk, garage, and more. Also revealed are those who self-named after their then-locations e.g. East Seventeen, and science-fiction e.g. The Orb, and the like. A fascinating book for anyone who has an interest in music - or for those who simply enjoy general knowledge.

Mark Beech’s music column has been syndicated in 300 newspapers internationally, including the US. He has written for The Sunday Times and appeared on Bloomberg TV and received rave reviews for his 1998 book, The A-Z of Names in Rock which generated over 50 radio interviews and was highly recommended by leading DJs including the legendary John Peel. Mark has interviewed thousands of stars and bands as diverse as Sting and The Smiths. His first book on rock names was inspired by an interview he did with Sting. Mark performed (very briefly) with failed punk band Marius and the Firebombers.