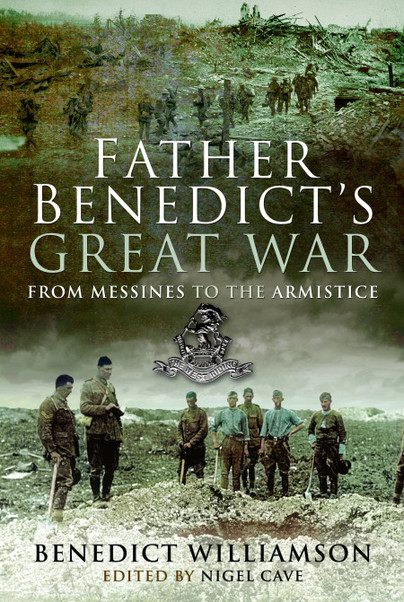 From Messines to the Armistice

Preorder
You'll be £11.99 closer to your next £10.00 credit when you purchase Father Benedict's Great War. What's this?
+£4.50 UK Delivery or free UK delivery if order is over £35
(click here for international delivery rates)

Happy Days in France and Flanders was written by Benedict Williamson within three years of the end of the First World War. It is a viivid account of his experiences, starting with the trauma of working in a Casualty Clearing Station during the Battle of Messines 1917. He was transferred to an infantry battalion, the 1/5th West Riding regiment (Duke of Wellington's), with whom he served for the rest of the war. He saw action in Nieuport and has particularly vivid accounts of the fighting associated with Operation Strandfest, a very successful pre-emptive strike by the Germans. During the Battle of Passchendaele he was involved in the fighting on the Menin Road. His division was caught up in the opening of the German offensive on the Somme in the spring of 1918, describing the desperate days of the retreat and the fighting that held the Germans west of Albert. His battalion took part in the Advance to victory and was involved in the capture of Lille and Tournai. There is a chapter on his ministrations to a soldier who was shot at dawn in September 1918.

In this completely new and revised edition, there are a number of new features.There is an extended biographical essay on this fascinating man. Notes on some of the characters who are named in the original text are provided. Maps are incorporated into the text for the first time and there is a black and white plate section.

Army chaplains received considerable attention during the centenary years, particularly Roman Catholic ones. Benedict Williamson was an articulate man and a shrewd observer of the War; his contribution to the literature of the war is significant and Happy Days is worthy of this major revision by a well known authority on the Great War.

Father Benedict Williamson had an unusual life. He was a successful architect and designed many churches and schools, several of which are still standing today. He became a Catholic in 1896 (when he changed his name) and was subsequently ordained for the Archdiocese of Southwark. He was much involved in the refoundation of the Brigettine Order and made a failed attempt to establish a male branch of it.

He became an Army chaplain and arrived in France in time for the Battle of Messines, posted a Casualty Clearing Station associated, in particular, with the the 47th (London ) Division; but was soon transferred to the 49th and, in particular, to 1/5th Duke of Wellington's Regiment, with which he served until after the Armistice.

After the war he returned to his diocese and continued to design new churches.He moved to Rome and continued his association with the Brigettines, at the same time writing a number of books with a religious and spiritual theme. An early admirer of Mussolini, he remained in Rome during the war and was involved in Monsignor O'Flaherty's Vatican based help line for allied PoWs and the hiding of the Jews.