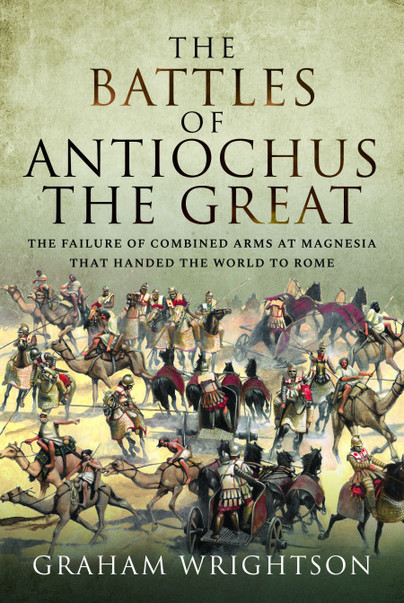 The Battles of Antiochus the Great (ePub)

Click here for help on how to download our eBooks
Add to Basket
Add to Wishlist
You'll be £8.99 closer to your next £10.00 credit when you purchase The Battles of Antiochus the Great. What's this?
Need a currency converter? Check XE.com for live rates

Antiochus III, the king of the Seleucid Empire for four decades, ruled a powerful state for a long time. He fought and won many battles from India to Egypt, and he lost almost as many. Compared with most of the other Hellenistic monarchs of Macedonian-founded kingdoms, Antiochus had a greater variety of units that he could field in his army. He was in a unique position among the other kings because he had access to the traditional infantry-based Greek cultures in Asia Minor as well as the cavalry-dominant cultures of Mesopotamia and Western Asia. Yet, despite these advantages, Antiochus repeatedly came up short on the battlefield and his tactical shortcomings were no more obviously laid bare than at the Battle of Magnesia-ad-Sipylum in 190 BC. There his huge combined army, one of the largest ever fielded by Hellenistic rulers, was soundly thrashed by the smaller Roman force.

Through an analysis of the Seleucid army, the inherited standard tactics of Macedonian-style armies reliant on the sarissa phalanx, and a detailed examination of the three main battles of Antiochus III, this book will show how it was his failure to utilise combined arms at its fullest realization that led to such a world-changing defeat at Magnesia.

Graham Wrightson is Associate Professor of History at South Dakota State University, USA. Originally from the UK (Coventry, then Wales) he graduated at Cambridge University before moving to Calgary, Canada, where he gained his Ma and PhD. His research specializes in ancient warfare, particularly that of Alexander the Great and the Successors.