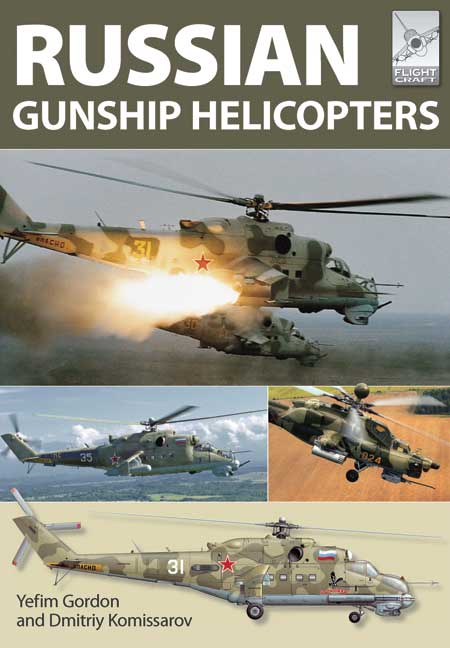 Click here for help on how to download our eBooks
Add to Basket
Add to Wishlist
You'll be £4.99 closer to your next £10.00 credit when you purchase Flight Craft: Russian Gunship Helicopters. What's this?
Need a currency converter? Check XE.com for live rates

* Profiles of iconic types such as the Mil MI-24 'Hind', the Mil-28 and the Kamov Ka-52 'Alligator'.
* Summary of design histories and careers
* Colour reference for paint schemes
* Critical review of available kits
* Over 180 colour and black and white illustrations, including 20 full colour side-views and a range of various 3-view line-drawings.

With profiles of a host of exciting designs, accompanied by a descriptive narrative history of the various types, this volume combines practical information with reflective historical analysis, making for a visually rich volume providing modellers with all they need to know about the most exciting Russian Gunship helicopter designs and associated model kits.

This edition deals primarily with the three principal attack helicopter types of the present-day Russian Army;

The Mil MI-24 'Hind' – otherwise known as 'the Flying Crocodile' – has been produced in large numbers with many versions and variants produced. It has been supplied to a host of countries and seen considerable combat action in conflicts both in the Soviet Union and abroad. It still forms the backbone of army aviation in Russia and remains at the forefront of national exposure.

The Mil-28 is a more contemporary type and is broadly the equivalent of the McDonnell Douglas AH-64 Apache.

The Kamov Ka-52 'Alligator' – NATO name 'Hokum-B' – also features. This helicopter is in service with the Army and is entering service also with the Russian Navy.

Well-illustrated histories and structural analyses are supplemented with detailed descriptions of the various plastic scale model kits which have been released, along with commentary concerning their accuracy and available modifications and decals. This level of detail and insight is sure to prove invaluable to a wide community of model-makers, both at home and overseas.

I knew little about Russian attack helicopters in general, and this book has improved my knowledge in this area. It will certainly prove useful to Russian aviation enthusiasts and modellers.

I found that this book had me reaching in to the stash to start building some of these very colourful and mean looking machines.

A pleasant synthesis on these powerful rotating wing machines.

Recently I was introduced to the FlightCraft series of Pen and Sword Books. This is an interesting series aimed at not only aviation enthusiasts, but more in specific to aviation scale modelers and researchers as well.

I ordered the Russian Gunship Helicopters title, by Yefim Gordon and Dimitriy Komissarov. It covers 3 distinct models of Russian attack helicopters. The ‘obvious’ Mil MI-24 ‘Hind’, but also the lesser known Mil MI-28 and the Kamov KA-52 (that’s one with counter-rotating main rotors).

The book is a great resource with extensive information on the development of the various types and many many great photographs. But that’s not all….. the second part of each chapter is made up of a review of various plastic model kits of the various helos. In this case including a few unknown (to me) Russian kit manufacturers as well as the more obvious ones like Airfix, Tamiya, Revell and the likes.

Also included are 3D drawings showing much detail and scale of the helicopters and reasonably well suited for 3D digital designers.

Last but not least there are pages full of detailed color schemes of each model, allowing the kit builders to properly color their models on completion.

I chose this particular title because there are already so many books about all the more mainstream (read: western powers) military aircraft that it would have been ‘just another book’ to me. But looking into a more exotic subject such as these Soviet machines not only provided me with some unknown information, it also was a good ‘test’ of the book series.

Test successfully completed…. I recommend this book to any (military) aviation enthusiast and especially to all kit builders wanting to dig into some Soviet fighting machines!

The authors clearly know their subject very well, and the advantages of having native Russian speakers writing on this topic are clear. ... The text is supported by a good selection of photos, with a mix of pictures of the real aircraft and well-built samples of the better models, detailed plans and colour side plans showing different paint schemes.

Ideal for modellers with well written content, neatly laid out and presented.

For modellers and model engineers, the book will be particularly welcome, reviewing available kits from Russia and other countries, together with information on how to make the most of these kits.