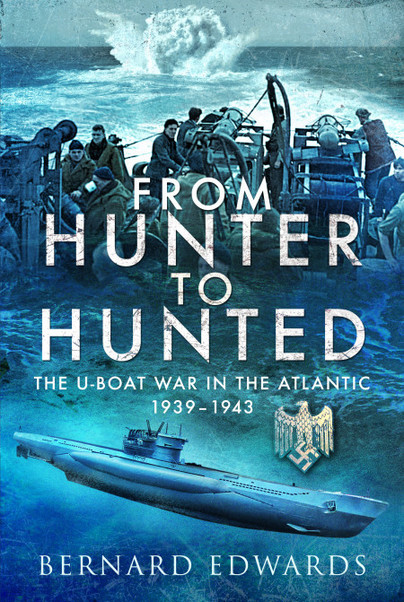 From Hunter to Hunted (Hardback)

Add to Basket
Add to Wishlist
You'll be £19.99 closer to your next £10.00 credit when you purchase From Hunter to Hunted. What's this?
+£4.50 UK Delivery or free UK delivery if order is over £35
(click here for international delivery rates)

In the early stages of the Second World War, Donitz’s U-boats generally adhered to Prize Rules, surfacing before attacking and making every effort to preserve the lives of their victims’ crews. But, with the arming of merchantmen and greater risk of damage or worse, they increasingly attacked without warning.

So successful was the U-boat campaign that Churchill saw it as the gravest threat the Nation faced. The low point was the March 1943 attack on convoys SC122 and HX229 when 44 U-boats sank 22 loaded ships.

The pendulum miraculously swung with improved tactics and technology. In May 1943 out of a force of over 50 U-boats that challenged ONS5, eight were sunk and 18 were damaged, some seriously. Such losses were unsustainable and, with allied yards turning out ships at ever increasing rates, Donitz withdrew his wolf packs from the North Atlantic.

Expert naval author and historian Bernard Edwards traces the course of the battle of the Atlantic through a series of thrilling engagement case studies.

The book is written in an easy style but this gives rise to what can only be described as “padding”.

As usual with Bernard Edwards’ books it is well written, interesting and easy to read and complete with an index and bibliography.


... Edwards’ case studies are a good introduction into the terrifying stresses and evolving situations of early to mid-war trans-Atlantic U-boat attacks. For those interested in merchant shipping, convoy attacks, and U-boat tactics, this work could act as a stepping stone to identifying ships and engagements for further study.

Barnard Edwards book 'From HUNTER to HUNTED the U Boat war in the Atlantic 1939 - 194' is one of few books which are page turners and reluctant to put down. I may be biased having been a young lad during the war, living near Cardiff docks. Our neighbour was a 50-year-old seaman, lost at sea early in the war. My brothers friend clung to a wooden raft in tumultuous seas until seen and rescued. He died later. My brother was a young junior officer on British tankers.

In convoy at night, ships trailed a blue light in the water. Alone one night, at the helm the 1st officer elsewhere, he could see brief flash of light as ship after ship was torpedoed and sunk. The ship he was trailing, carrying ordinance and tanks, disappeared in a split-second blinding yellow flash, tossing the tanker around as he clung to the wheel. The convoy continued through floating wreckage and oil covered survivors left floating in the cold seas. If they were lucky enough to be rescued, their wages ceased the moment they left their ship.

Early in the war some German U Boat commanders worked within the 1936 Prize Ordinance which required them to ensure the safety of the ship's crew before sinking her. This was soon replaced by Standing Order 154 which clearly said 'Rescue no-one and take no-one on board. Do not concern yourselves with the ship's boats.'

The Atlantic soon became a bloodbath of sunken ships culminating in 1943 when a U Boat pack of thirty-eight boats attacked two Britain bound convoys sinking twenty-two Allied ships with a loss of 900 crew. The human cost was greater as families in Britain lost the bread-earner and became destitute. Not the responsibility of the ship-owners!

Captain Bernard Edwards is a master storyteller with an extensive knowledge of the sea and ships, and his books have received international recognition.

From potential war-winning weapon, to hunted target, the U-Boat service promised so much. The author provides an absorbing presentation of the progress of war for the German U-Boat Service with an interesting photograph selection in support. – Highly Recommended.

From Hunter to Hunted is an illuminating read for a theatre of World War II that is too often described in statistics and technical jargon. Edwards has the story-telling flourishes of a man well used to being at sea. He describes the actions in detail, while adding just enough background information to humanize the conflict without disrupting the narrative, though a final polish might have removed some unfortunate repetition. This book works well as a gateway book into the world of the U-boats for those with a passing interest or are daunted by bigger and more technical works. Those already familiar with U-boats will enjoy the stories in From Hunter to Hunted, and sometimes that is all you need from a book.

"I was immediately fascinated by this book, my first venture away from Victorian history to WWII. Expertly written, it portrayed the perils and dramas of warfare in the North Atlantic between the convoys and German U boats. The bravery of the convoy sailors, from the captains to the youngest stoker, shines through whereas the cold-bloodied attitude of the U boat commanders may have been too ruthless - determined to sink as many Allied ships as possible with a total disregard for life. His skillful writing brought to life the storms, the sailors' fear and response to attacks. Reading his accounts made me feel as though I was present. A cracking and informative read - I will definitely read more by Captain Edwards and I highly commend it."