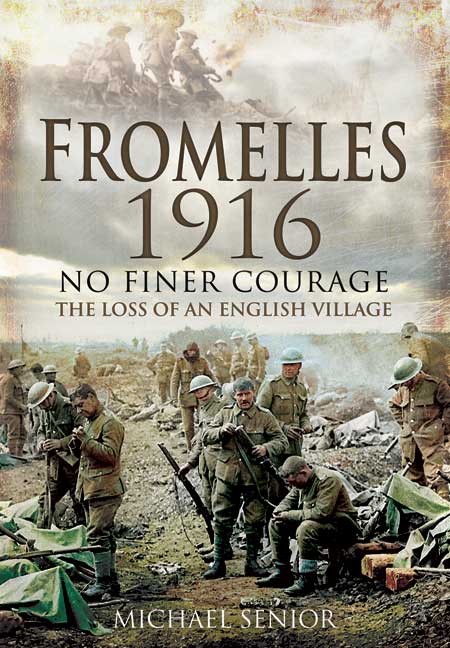 No Finer Courage The loss of an English Village

'...this book is much more than the local chronicle of a grievous period on our history. For those who, so many years later, find it difficult to comprehend the vast scale of human sacrifice between 1914 and 1918, here it is in microcosm.' - John Craven, Broadcaster.

History tells us that no community in Britain escaped the carnage of the First World War. Up and down the country, war memorials bear silent testimony to the men who went away to fight and never returned. The Lee – a village in Buckinghamshire – was certainly no different. Men from the village joined the local Buckinghamshire Territorial Battalion and went away to fight; many died serving their King and Country. But The Lee was special in a number of ways. On the eve of war in August 1914, the village itself was owned by Sir Arthur Liberty, the founder of the Regent Street store. As the Lord of the Manor he made a profound personal impact on village life and introduced The Lee Magazine, which vividly recorded the effects of the war on the community. The war was a great leveller: men from rich and poor backgrounds alike joined the colours and fate was even-handed in deciding who survived the hell of the trenches.

In addition to a full run of The Lee Magazine, the author has drawn on a wide range of archive sources that includes unpublished letters, diaries, memoirs and newspapers. For today's reader, Fromelles 1916 affords an unrivalled insight into the life and times of an English village in the First World War – a way of life swept away for ever by the changes ushered in by the conflict. Also include are guides to the Fromelles battlefield and the new cemetery at Pheasant Wood. Michael Senior was born in Yorkshire and now lives in Buckinghamshire. He has had a life-long interest in the First World War and, since his retirement, he has devoted much of his time to research, lecturing and writing about aspects of the Western Front.

This book provides a special record of the experience of a village, and how war impacted on it. Of course, this is a story played out across every single hamlet throughout Britain, as well as Europe. Each community of course have Atheir own individual tale to tell, of how war affected them. But, how many of these stories have not been recorded, not least with a focus on the community, their soldiers and the connection to the battlefront. To that end, Senior has done something special by recording and relating this unique local story so that it will not be forgotten.

This book includes coverage from The Lee Magazine, as well as sources such as letters, diaries, memories and newspapers and the story of the Buckingham Territorial Battalion, that went away to fight. It is a special local story, but linked to the wider battlefields of Fromelles. It develops the story of The Lee before the war, the early years of the war, as well as the call to arms. Against this backdrop is the story of Fromelles, with both the preparations for it and also the attack itself.

The author makes clearer that he has written this book because there was a story to tell. On the one sense it is a local story about the people of The Lee, and the Lee men in the First World War. But, more than that, it is reflective of the experiences of many villages and young soldiers to the time.

This is a welcome republishing of a work...This will be of interest not only to British readers but Australians, as the 2/1st Buckinghamshire Battalion was on the immediate right of 59th Battalion AIF at the junction of the two Divisions... Well researched and written.

Fromelles 1916 describes the battle from the perspective of 2/1st Buckinghamshire Battalion and its officers and men from The Lee; it records their loss and distress amid the exhortations of their local figures at home that sacrifices were necessary, and the witty and poignant poetry written by their talented officers.

The book is well written, but it is fairly unrelieved tragedy, as the title heralds.

This book does a super job of reminding us of the terrible human cost of the First World War and the impact it had on small communities all across Britain.

One of the most striking aspects of World War One was the way in which whole villages and communities involved themselves in the war effort. Men and boys would join up in large numbers, forming part of a unified group. The majority of them would stay together through training, and eventually into the fighting unit. They would go into the trenches together and die together. The result was that within a very short time, a village could be almost decimated. This is the story of one village - The Lee in Buckinghamshire. In 1914, the village was owned by Sir Arthur Liberty, founder of the famous Liberty department store. As the Lord of the manor of Lee he had tremendous influence on the village and its people. Both rich and poor joined the army - very few came back. The story charts what happened to the young men of the village - both those who lived and worked there, and those who were frequent visitors to Sir Arthur Liberty's home. In August every year, he held a Lee Week - when a group of young men and women, friends of the family came for tennis, cricket and other games. Only the story of the men are told - it would be interesting to find out what happened to the women who were also present at that time. Almost all the men joined the infantry and were present at the battle of Fromelles - a disaster from which few returned. It makes an interesting study of a village. The research is incredibly detailed and is backed up by photographs and illustrations that help to bring the village to life. It is a record of village life which was changed for ever as a result of the conflict. 4 stars,

Michael Senior's No Finer Achievement: The Loss of an English Village was first published in 2004 by the now defunct Sutton Publishing. Now republished by Pen & Sword as Fromelles 1916: No Finer Courage: The Loss of an English Village, this new edition appears to be virtually unrevised; it's reprint the result of the recently renewed interest in Fromelles. The action was a consequence, althouh not a direct component of the British July Somme offensive. Ill-considered and ill-planned, the two division operation (61st and 5th Australian) led to major losses and made no significant gain; either ground or advantage. For many years it remained an almost forgotten battle in Britain. In Australia the nation kept a candle of both remembrance, and blame, burning.

Then in 2008, operating on leads supplied by a dogged Australian researcher, Lambis Englezos, the remains of 250 bodies, mainly Australians were located in a lost Fromelles war grave, hard by Pheasant Copse. Subsequently, a new CWGC Cemetery named, ineptly, Fromelles (Pheasant Wood) Military Cememtery was created and inaugurated on 19 July 2010. Central to Senior's tale is not just of the battle, but the life and the people of the Buckinhamshire village 'The Lee'. It was the demesne of the redoubtable Sir Arthur Liberty - owner of the Liberty Store, one of the engine rooms of the arts and crafts movement - who effectively owened and led the village with warm patriarchal interest and vision.

No less than nine villagers died at Frommelse with the 2/1 (TF) Bucks Battalion, Sir Arthur's nephew and heir, Ivor Stuart-Liberty lost a leg in the action. In all 30 of the 775 who lived in The Lee died are commemorated on the village memorial during the Great War, all are marked in this book. Whilst this is a welcome reprint of a freshly and confidently written and researched book I consider that it remains a great pity that the author and publisher have not taken greater advantage of recent discoveries at Pheasant Copse to expand the work. Nevertheless this is a book with a difference and one which I hugely enjoyed.

Subtitled 'No Finer Courage - The Loss of an English Village', this fine work tells the story of the men of a small village in Buckinghamshire, The Lee, who went away to fight for their King and Country. On the eve of the war the village was owned by Sir Arthur Liberty, founder of the Regent Street store of the same name. As the Lord of the Manor he had a profound impact on the village and introduced a magazine which recorded the effects of the war on the small community. In addition to this material the author has drawn on a wide range of unpublished letters, diaries and memoirs. The book provides an unrivaled insight into the life and times of a small English village, as well as including guides to the Fromelles battlefield (so much in the news of late) and the new cemetery at Pheasant Wood. 8/10

WWI: Start of Battle of Fromelles

The Battle of Fromelles took place from July 19-20, 1916, during World War I. The action was intended partly as a diversion from the Battle of the Somme that was taking place about 80 kilometres (50 mi) to the south. The operation, carried out midway between the British-occupied village of Fleurbaix and that of Fromelles behind the German lines, sought to retake a salient just north of the latter, situated at about 16 kilometres (9.9 mi) from the city of Lille.