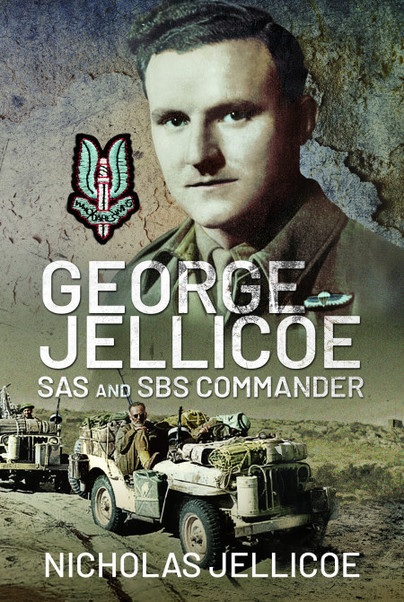 Click here for help on how to download our eBooks
Add to Basket
Add to Wishlist
You'll be £4.99 closer to your next £10.00 credit when you purchase George Jellicoe. What's this?
Need a currency converter? Check XE.com for live rates

George Jellicoe by Nicholas Jellicoe was probably the best military biography of 2021. It is an intimate and insightful study of a complex yet charismatic character, a rare and frank study of a father by his son. George Jellicoe was the son of Admiral Sir John Jellicoe, commander of the British Grand Fleet at Jutland in 1916, yet he was never compromised by his privileged upbringing.
In this work his son, Nicholas, who has come late in life to write three extraordinary good books, describes his father's exploits in action and public service, as well as controversial episodes.
George Jellicoe was recruited in 1940 from the Scots Guards into the early SAS and later commanded the Special Boat Section (SBS) in the Mediterranean and the Aegean. His culminating wartime service was to save Athens from communist led guerrillas. Post-war Jellicoe served in the Foreign Office, and later in the House of Lords as a Tory minister, but the major part of this book gives amazing detail about British and Greek Special Forces during their amphibious campaign in the Mediterranean during WW2. There is an earlier biography of this British Achilles, but Nick Jellicoe's biography - focusing much more on George Jellicoe's career in Special Forces, on the SBS during the Greek campaign and on how this influenced his subsequent diplomatic career, and via anecdotes from George's life - makes a much more interesting book.
Thanks to the son's research and his unique access to records and individuals, this is a first class biography of a significant post WW2 public figure - would that there were more like George! - and the men and women in his ambit. If you only read one recently published WW2-related biography, then make it this one!

The name of Jellicoe is most frequently associated with the Admiral who commanded the Grand Fleet during the First World War, but in 1940 his son took an entirely different path, joining the fledgling Commandos before serving as Second-in-Command of the SAS, and then leading the SBS from early 1943 onwards. As the author of this biography is Jellicoe's son, there can be few who are better placed to provide so detailed a portrait of the man, but it is equally the story of these pioneering special forces units and sheds fascinating light on their organisation and tactics. The book is divided into four parts; the final two summarising his post-war career in the Foreign Office and the House of Lords, but the bulk of the narrative focuses on his wartime exploits, beginning with the formation of the SAS, its early operations, and the devastating raids of 1942 in which Jellicoe played an active role, while the SBS section describes their numerous operations across the Aegean in 1943 and 1944, culminating in their important role in the liberation of Greece.