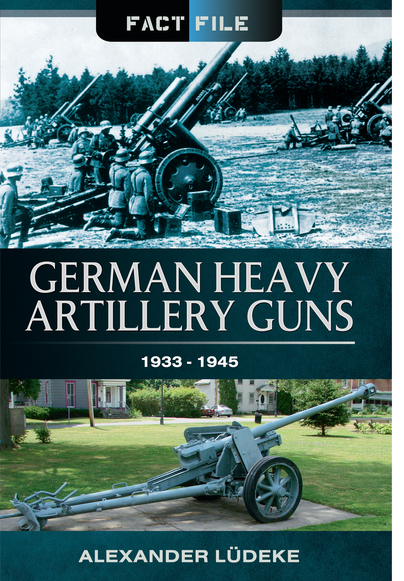 Add to Basket
Add to Wishlist
You'll be £12.99 closer to your next £10.00 credit when you purchase German Heavy Artillery Guns. What's this?
+£4.50 UK Delivery or free UK delivery if order is over £35
(click here for international delivery rates)

Covers large calibre artillery guns beyond a diameter of 75 mm, used by the Germans during the Second World War. Whilst artillery was perhaps no longer the dominant force it had been in the trench warfare of the Great War, it was nevertheless essential, both in air defence and against tanks. This volume of the Fact File series presents the most important of the largest German artillery and air defence weapons, as well as railway guns and launchers. A meticulously researched and superbly illustrated book, which provides a compact and competent overview.

This sort of book is always good for turning up interesting snippets. I hadn't realised that the '18' used at the end of many older German weapons of the Second World War was used to hide weapons developed in the early 1930s by making it look as if they were left over from the period before the Treaty of Versailles.

This book has two advantages over more general weapons guides. First is the inclusion of a wide variety of German guns, including the more important developmental models. Second is the examination of foreign-made guns from the German point of view, rather than having that as a footnote to their original use. The author is also good on the connections between different guns, treating them as related rather than as isolated items.

Overall this is a useful guide to the topic - too detailed to be called an overview.

Another title in the [i/]Fact File[i] series of pocket guides, this offers a concise technical history of artillery used by the German army during WW2, including large calibre pieces beyond 75mm. Whilst artillery was arguably no longer the dominant force it had been during the Great War, it was nevertheless essential, both in air defence and against tanks. This volume presents a compact overview of the most important weapons of the largest German artillery and anti-aircraft weapons, as well as railway guns and launchers.

Artillery is not my strongest point and this book helps explain a few things – which is precisely the point of it. Guns and projectile launchers of all shapes and sizes are included from Panzerfausts to colossal siege guns. I have a lot of fun rummaging around in old bunkers with my mates and it is good to see what went into them.

... As with others in this series, each weapon incudes background notes and a date table, along with pictures that are archive photos, modern photos of an example held in a museum collection, and/or some good colour artwork. Some of the guns are remainders from WW1, sometimes with minor updates, especially on wheels suitable for towing by motor vehicles rather than horses, along with lots of new build types. Among each category there are some captured weapons which are included as the German military made good use of the large number of guns captured in the first half of the war, particularly from France and Russia among others.

An interesting selection and as is intended, a handy pocket guide which is a convenient one-stop reference that is worth adding to a bookshelf.

This soft cover, 128 page, pocket sized book covers all of the mortars and most of the artillery used by the Germans in World War II. The title undersells the contents, as the book has separate chapters covering: mortars; Infantry Guns; Gebirgsgeschütze (Mountain guns); Light Guns; Anti-Tank Guns; Light Field Guns; Medium Field Guns and Heavy Field Guns. All are covered in this highly accessible overview of the Wehrmacht’s artillery.

The book starts with a short introduction and glossary and then each weapon is covered as a separate subject. Every artillery piece is comprehensively described in a concise technical history with black and white photographs, mostly from the author’s own collection, or by colour photographs of the weapon in a modern museum. A reference table of technical data accompanies the text.

The majority of weapons in the book are of German origin but also covered are weapons that were captured from Germany’s enemies. Guns such as the 8.76cm Feldkanone 280(e)– better known to us as the British 25 Pounder - are featured. Some German artillery such as the series of Pak guns ranging from the 3.7 cm Pak 36, through the 5 cm Pak 38 to the 7.5 cm Pak 40 are well known. Less well known are guns like the 8 cm Panzerabwehrwerfer 600, which had a smooth bore barrel and fired fin stabilised rounds. All are covered in this book.

Whilst many books have been written on the subject it is unusual to find a single volume that covers all of this range of weapons. A companion volume covering Flak, Railway Guns and rockets is promised. There is much here for the military historian, Wargamer or model maker who is new to the subject, although those of us who thought we knew almost everything about German weaponry will also find new and interesting information. Being a pocket volume there is not room for coverage in great depth but as a broad yet succinct guide to German artillery it is difficult to fault. Recommended to all interested in the subject and hopefully we will see more books in the Fact File series of a similar high standard.