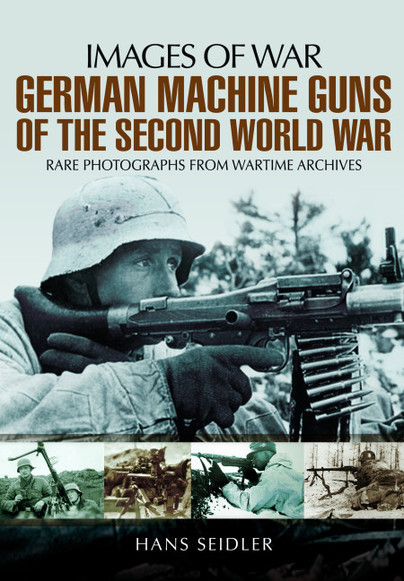 Add to Basket
Add to Wishlist
You'll be £14.99 closer to your next £10.00 credit when you purchase German Machine Guns of the Second World War. What's this?
+£4.50 UK Delivery or free UK delivery if order is over £35
(click here for international delivery rates)

German Machine Guns of the Second World War is a highly illustrated record of the German war machine between 1939 – 1945. Many of the photographs, all from the authors collection, come originally from the albums of individuals who took part in the war.

Arranged by theatre chronologically, the book analyses the development of the machine gun and describes how the Germans carefully utilised weapons such as the MG34 and the much vaunted MG42 into both offensive and defensive roles. Supported by a host of other machine guns like the MP28, MP38/40 and the lethal Sturmgerher 44, it depicts how these formidable machine guns fought against an ever increasing enemy threat.

Using over 250 rare and unpublished photographs together with detailed captions and accompanying text, this book provides a unique insight into German weaponry from early Blitzkrieg campaigns to the final demise of the Nazi empire.

If you want to examine / obtain imagery of German machine guns in action, then this book is a “must have”. It is certainly a superb book in this aspect and a very welcomed addition to my personal library. I am incredibly pleased with the contents and it certainly gives me plenty of examples of these weapons in action – which is exactly what I desired when I obtained a copy.

As with all of the Images of War series you get a ton of photos and considering the cost of the book it’s a good bang for your money. All the images are period black & white photos and all are captioned thoroughly and a page or two of narrative that starts each chapter.