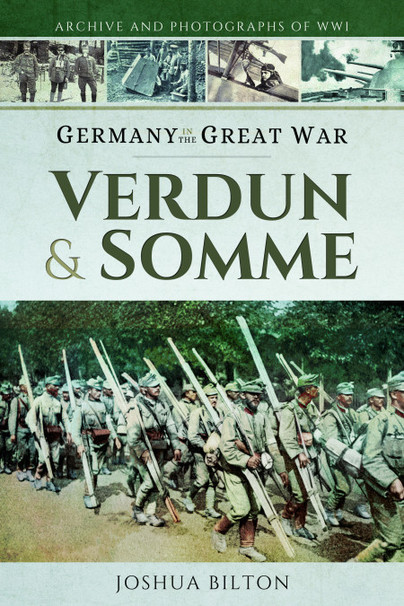 Germany in the Great War (ePub)

Click here for help on how to download our eBooks
Add to Basket
Add to Wishlist
You'll be £4.99 closer to your next £10.00 credit when you purchase Germany in the Great War. What's this?
Need a currency converter? Check XE.com for live rates

For the Central Powers, 1916 was a year of trial and error, of successes and failures, of innovation and of drastic changes. Tactics developed, while war aims mutated to suit the inertia of trench warfare. Advances were effectively countered with the development of new weaponry, or indeed aided by their inclusion.

Across all fronts, whether at home or in Poland, citizens and soldiers alike stood fast against Entente forces. On the Western Front, bitter fighting continued apace. To the east the armies of Austro-Hungary, Germany and Bulgaria battled Entente forces. Meanwhile at sea, the German High Seas Fleet ambushed the Royal Navy off the coast of Denmark. On the Home Front, the poor harvest of 1916, coupled with a lack of transport, led to a winter of stark deprivation. As a consequence, the German government introduced what was effectively a system of rationing entitled, ‘sharing scarcity.’ While to the south, Ottoman forces fought Allied soldiers for control of Kut and Erzurum, a fortified trading port in eastern Turkey.

Germany in the Great War: Verdun, Somme is the third publication in a five-part series. In addition to the Author’s introduction and a chronology of events, five hundred contemporary photographs, many of which have never before been published in this country, are included.

"Photograph-wise, the selection is excellent with 373 black and white photos. Uniforms and environments dominate the selections, which is a big help to painters and modelers. Some action shots are included."

For those modellers with an interest in WWI, this offering from Pen and Sword will enable you to create accurate representations of many different aspects of the German military in WWI... for pure visual records the photographs are stunning.

A really fascinating book, this book is brilliant. The book has an excellent Bibliography, Timeline, Notes and Endnotes section to it, really comprehensive. I hope this is a WWI version of the Images of War Series because from this book, only books can only be a huge success. This book certainly has my highest recommendation.

Some fascinating images, with informative captions, and interesting to see from the German side of the story. Some incredible pictures and maybe this will help many get a good understanding on the 'other' side of the 'War to End all Wars'.

The scope of the images in this book looks beyond the title. They include all the main fronts active in 1916. As ever there are some images that are well known but the reader is rewarded with some lesser-known images that add value. Overall an interesting catalogue of well curated images.