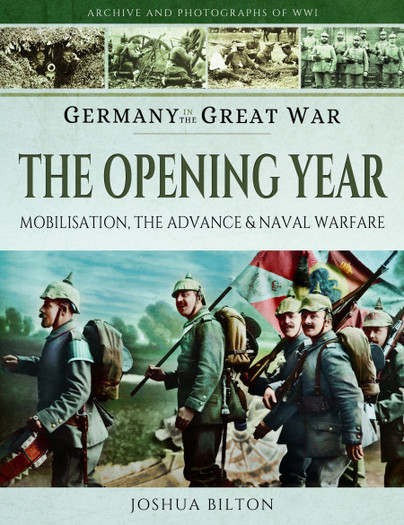 Germany in the Great War - The Opening Year (Paperback)

Mobilisation, the Advance and Naval Warfare

Add to Basket
Add to Wishlist
You'll be £15.99 closer to your next £10.00 credit when you purchase Germany in the Great War - The Opening Year. What's this?
+£4.50 UK Delivery or free UK delivery if order is over £35
(click here for international delivery rates)

Germany in the Great War - The Opening Year is the first publication in a five-part series by Josh Bilton that pictorially examines the Central Powers struggle for victory in 1914.

From mobilisation, to annexation and occupation, this book illustratively details how the German and Austrian armies rapidly advanced on both the Western Front (WestFront), and to the east (OstFront). How Turkey, was driven back (following late entry into the war) by Russian and British forces at Basra, Do&#287;ubeyaz&#305;t and Köprüköy. And how at sea, despite a naval arms race, which had come to dominate the pre-war era, German and British surface craft largely evaded contact. Choosing instead to wage a war of attrition and blockade: a campaign that was to severely impact those on the Home Front.

This superbly illustrated book is a valuable visual archive of the Teutonic, Austro-Hungarian and Ottoman efforts during 1914. Included within is a chronology of events, as well as, a detailed mapping of campaigns on all fronts. Accompanying this is over 500 photographs, many never before published or indeed seen in this country.

This is an impressive collection of photographs, giving a new slant to an otherwise familiar topic.

The book provides an excellent visual record of the Central Power efforts during 1914.  It is complimented by an excellent chronology of the main events, as well as comprehensive mapping of the campaigns on different fronts, never before seen.

This is a volume in the Great War series from the German perspective. There is a wealth of photographic illustration and this is perhaps the most important book in the series because the war was to be won or lost in the first year – Highly Recommended.