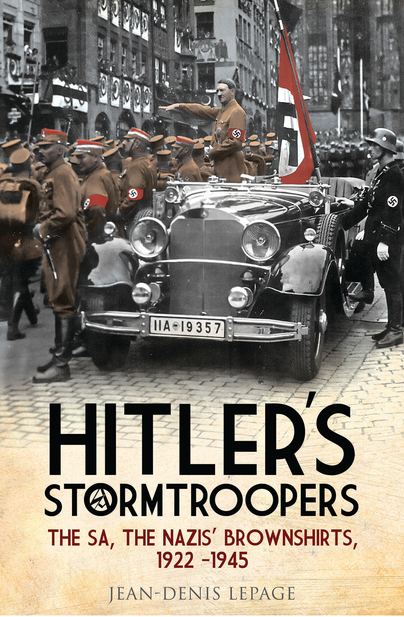 Click here for help on how to download our eBooks
Add to Basket
Add to Wishlist
You'll be £4.99 closer to your next £10.00 credit when you purchase Hitler’s Stormtroopers. What's this?
Need a currency converter? Check XE.com for live rates

The Sturm Abteilung der NSDAP (SA, assault battalion of the Nazi party) – created in August 1920 – were squads of strong arms intended to protect the Nazis’ meetings, to provoke disturbance, to break up other parties’ meetings, and to attack and assault political opponents as part of a deliberate campaign of intimidation.

After 1925 the name Braunhemden (Brownshirts) was also given to its members because of the colour of their uniforms. Under the leadership of Hitler’s close political associate, Ernst Röhm, the SA grew to become a huge and radical paramilitary force.

This book answers several questions concerning the SA. How did the SA become a national movement? What was the relationship between Röhm and Hitler? What role did the SA play in providing Hitler with the keys to power? After the seizure of power by the Nazis on January 30, 1933, what was the function of the Brownshirts? Why did the brutal and scandalous Ernst Röhm stand in Hitler’s way? What became of the SA after the bloody purge of June 1934, the notorious ‘Night of the Long Knives’?

In this 276 page book, Jean-Denis Lepage really has written a comprehensive study of the SA including the history of both the organisation and their rivals the SS, uniforms, flags, the rank structure and their funding. He writes in a totally honest and neutral manner, he does not come across as a NAZI fan-boy or apologist, giving you the facts in a straight forward manner. Having said that, the book really is a surprisingly easy read and is in-depth enough to give you a broad understanding of the subject, but not to fact heavy. Illustrated with more than 100 line drawings, Jean-Denis has produced an excellent history of an organisation that was central in the early years of the NAZI party. Certainly a worthwhile purchase if this is your area of interest.

If one wishes to learn about why Hitler chose to execute Ernst Röhm, I strongly recommend this book as it carefully unfolds the historical events that eventually led to his execution.

In Germany, after 1918, armed units were operated by political Parties and political groups as a standard element of their
structure. This book provides an insight into the Sturmabteilung der NSDAP. It is carefully researched and illustrated by sketches and drawings. Essential reading for anyone wishing to understand the political scene in Germany between the World Wars, and the rise of the Nazi Party, Recommended.

One Lepage's fascinating account of the extraordinary rise to power of Adolf Hitler in pre-war Germany and during the war years on the back of is "brownshirts".