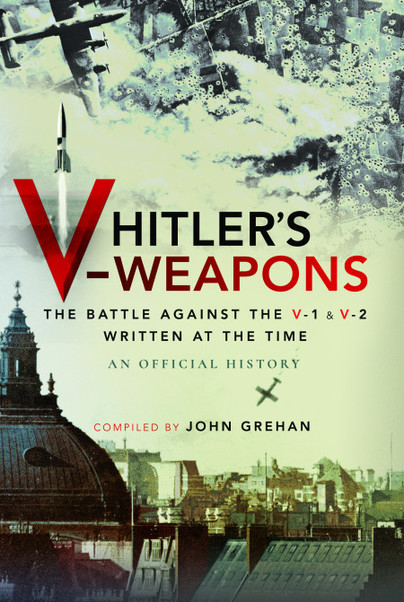 Click here for help on how to download our eBooks
Add to Basket
Add to Wishlist
You'll be £4.99 closer to your next £10.00 credit when you purchase Hitler's V-Weapons. What's this?
Need a currency converter? Check XE.com for live rates


Grehan's book offers readers an excellent opportunity to get their hands on the inside story of Britain's response to Hitler's V-weapons.

Wars are filled with ‘what ifs’ but the German Vengeance Weapons had the potential to alter the military balance. The official documents of the time have been compiled to provide the most detailed account of how Britain saw this phase of the war. – Very Highly Recommended

Mr Grehan collates reports and analysis from the war against the V weapons, divining important chunks of detail to underscore narrative histories that do the rounds. I like the way he eschews the urge to interpret the writings of others and sticks to the script. This serves to make this volume all the more authentic. Like the Home Guard book we saw earlier, this is an important resource for students of the war on the home front in Britain.\r\n\r\nRead the full review here

I have long had an interest in the V-weapons of WW2 and found this most interesting, extending my existing knowledge of what was involved. I like this for the level of detail it contains but also that is records facts and historical events and how so many factors had to be taken into account to tell the real story. If you have an interest in the German V-weapons of WW2, I would say this should be one of your basic references. Definitely reccommended.

The story of the battle against the German V-1 flying bomb and V-2 rocket is more fascinating than I thought. The official history of this battle, recently compiled by John Grehan, reminds of how the unmanned aerial vehicle made its debut long ago and includes Norwegian and Swedish aspects.

The book is an intriguing read which brings the threat to London during the closing stages of WWII alive to the reader. Highly recommended.

For statistical and historical information on the UK side of the struggle against the V1 and V2 weapons, this book is probably the best you will find in terms of depth and breadth of information.